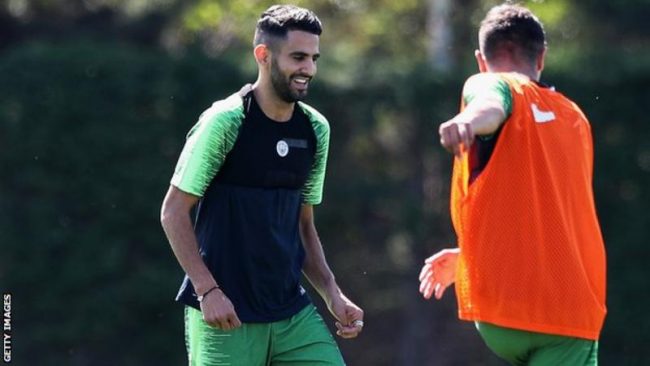 Having begun training with his new club, former African Footballer of the Year, Riyad Mahrez reveals he joined Manchester City because he wants to win the Champions League.

​The 27-year old joined the Premier League champions from Leicester City in a club-record £60m deal on Tuesday, and his first training session with his new teammates on Thursday.

Mahrez said he wanted the opportunity to work under Pep Guardiola and also partake of the ambition of the Manchester club.

“The Champions League is for big clubs, they’re a big club, they have everything to try to win it,” the Algerian told English reporters.

“City have ambition to go further than the Champions League quarter-finals like they did last season. I made the decision to come here because I want to be part of that.

“Pep [Guardiola] is a big manager, he’s won a lot of things and made history with this club.

“I’ll give my best to achieve for the club. If I can help add quality.”

It is however not uhuru for Mahrez who faces competition for a starting place, with Leroy Sane, Bernardo Silva, Kevin de Bruyne and Raheem Sterling already operating on the wing.

But Mahrez, whose five-year deal at the Etihad is the sixth highest fee ever by an English club, says every club has “great” players and competition is “part of football”.