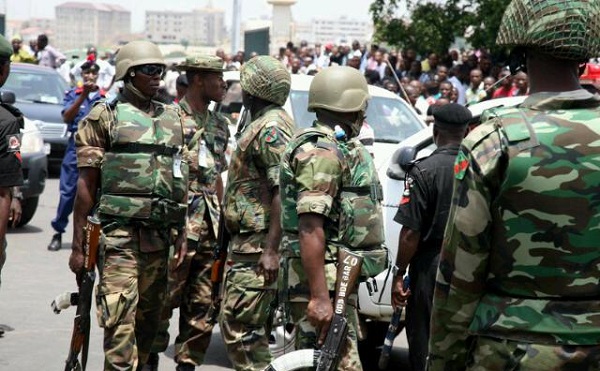 There was confusion in the outskirts of Maiduguri, Borno state as residents were sent running for safety following indiscriminate shooting by some soldiers.

Troops from the Military Garrison, Maiduguri, despatched on operation to the outskirts engaged in sporadic shots which drew immediate response from their counterparts at Molai axis, a few kilometres out of the metropolis along Maiduguri-Damboa road.

However, residents who had feared it was Boko Haram attack, scampered for safety as they heard gunshots at about 3pm.

READ ALSO: INSECURITY: FG must admit that the nation is at war with itself – ACF scribe

Haruna Kachala, a Civilian Joint Task Force, said “Initially, we thought the military were test firing their equipment, but when the other troops at Molai general responded to the fire, residents ran helter-skelter.”

A combined team of hunters, civilian Joint Task Force and the Federal Special Anti Robbery Squad, led by Gov. Babagana Umara, quickly moved to the scene to assess the situation.

Gov. Umara told newsmen that there was no cause for alarm, stressing that his government would ensure that peace and security returned to all parts of the state.

“We are yet to ascertain what exactly happened, but it was not Boko Haram attack as earlier speculated.

“We shall equip and strengthen the security agencies to improve on emergency response, to address issues like this,” he said.

Residents have however been advised to shun rumour mongering that could cause unnecessary fear.