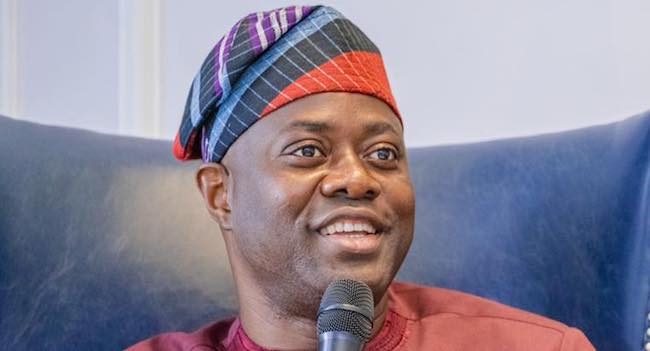 Governor Seyi Makinde of Oyo State has stated that cash stolen during his predecessor, late Senator Abiola Ajimobi’s government, would be recovered.

He stated that he had filed a letter to the Economic and Financial Crimes Commission (EFCC) requesting an investigation into the corporation that was allegedly used to drain monies from the state.

The governor spoke in Ibadan on Saturday during a show called State Affairs on Splash FM, according to a statement from his Chief Press Secretary, Taiwo Adisa.

He claimed that his administration had taken bold actions to prevent ghost workers and pensioners from being added to the payroll.

“Let me give you an example – when I came in, I looked at how some monies were spent and I believed it was the Paris Club refund they moved, which was about N7bn to N8bn, to Oyo State Road Maintenance Agency.

“This is an agency that operates normally on a budget of about N45m every month but this money came in around November 2017, and in early 2018, they started spending the money.

“When we came in, we discovered they finished spending the money on nothing within one year. They stole the money and I know those behind the stealing and I am after them right now. There is a company called Chinese Global. They said they are Chinese people but we know the people behind it. The company has been shut down as we speak,” Makinde said.

The governor claimed that he had already questioned OYSROMA’s General Manager about the matter, and that he had been told that no new recruitments or contracts had been given.

He explained, “He (the GM) said the company supplied asphalt and I said if the company did, was the asphalt used to repair roads without employing new people and giving out contracts? He said the money was moved from OYSROMA to Chinese Global and two other companies without any supply from the companies.

“As a result of that, I wrote to the EFCC and reported the matter about what we are facing here. Chinese Global is also the company they awarded the Bembo-Apata Road contract to, and the same company got the Ido-Eruwa project. But I said to them, ‘guys, you have Oyo State money with you. Go ahead and use the money to finish up the roads and they promised to do it.’ As soon as former Governor Abiola Ajimobi passed on, they reneged on all those projects. And I said, fine. As long as you have Oyo State money with you, I will get it back for our state.”

He went on to say that the money was worth between N12 billion and N15 billion, adding that the thieves were not Chinese but Oyo State residents.

Yari, Marafa decamp to PDP ahead of 2023 elections