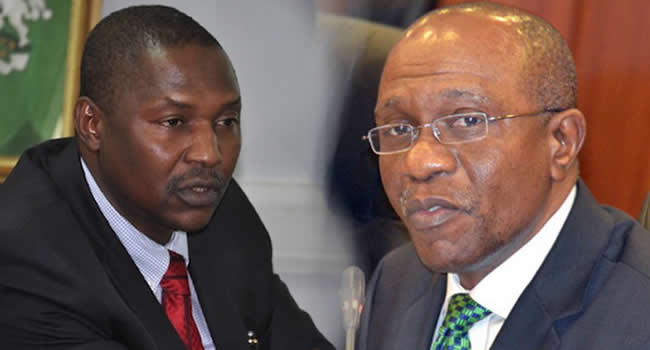 The House of Representatives was thrown into a rowdy session after top government functionaries invited to appear before the Ad Hoc Committee investigating the status of recovered loots and assets between 2002 and 2020 failed to show up.

Among those who shunned the invitation of the committee for the hearing scheduled for Monday, were Minister of Justice and Attorney General of the Federation (AGF), Abubakar Malami; Governor of the Central Bank of Nigeria (CBN), Godwin Emefiele; Minister of Finance and Budget Planning, Zainab Ahmed; Chairman of the Economic and Financial Crimes Commission (EFCC), Abdulrasheed Bawa, and the Accountant General of the Federation, Ahmed Idris, as well as other heads of agencies.

Chairman of the Committee, Adejoro Adeogun, who expressed his anger and disappointment at the attitude of the government officials, said the action of the ministers and heads of agencies was a “mark of disrespect for the National Assembly” and would not be tolerated.

The Committee, according to Adeogun, would give the ministers and other invitees another chance to appear before it on Tuesday, while also directing that Malami must appear before the Committee in person.

Ripples Nigeria had reported that the House Committee had invited the ministers and others to appear before it to explain the status of looted funds and public assets recovered in the last 18 years.

Adeogun, had, in a statement, mandated the ministers and other invitees to appear before it “being the day the panel is holding an investigative hearing on the recovered assets.”

According to the statement, the investigation will cover the period between 2002 to 2020.

“The Committee is calling for memoranda from stakeholders and the general public pursuant to Sections 88 and 89 of the 1999 Constitution of the Federal Republic of Nigeria (as amended).”

He added that the essence of the hearing, according to Adeogun, was to ensure effective and efficient management and utilization of the recovered assets.