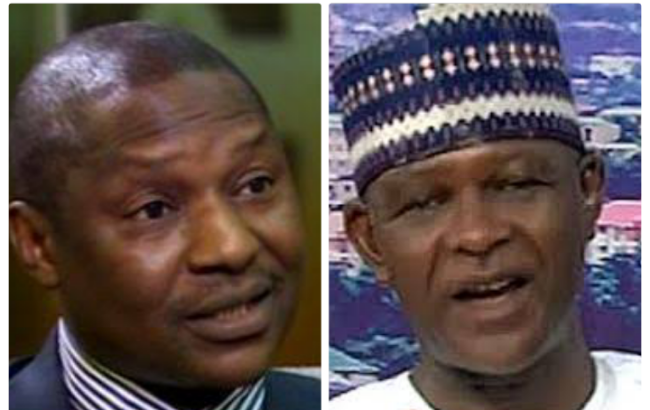 The Attorney General of the Federation, Abubakar Malami, and the Nigerian Governors Forum on Thursday engaged in verbal sparring over the payment of $418m to consultants for services rendered in their role in the Paris and London clubs refunds.

Malami made his stance known during an interview with AriseTv on Wednesday, monitored by Ripples Nigeria.

This was despite the governors’ opposition to it and the recent order issued by the Federal High Court in Abuja stopping the deduction of the money from the accounts of the 36 states to settle the judgment debts.

According to some of these contractors, their payments were for services rendered regarding the recovery of funds over-deducted by the federal government from their allocations between 1995 and 2002 to service the London Club and Paris Club loans.

The contractors among the creditors claimed to have executed projects for the various local government areas of the country but the Association of Local Governments of Nigeria (ALGON) has denied the execution of the projects.

However, during the interview, Malami said it was too late for the NGF to renege on its initial agreement to pay the consultants.

He further noted that the NGF, ALGON and the consultants entered into a consent judgment of $3.2billion in 2013, which they made a commitment to pay which was effected between 2016 and 2017.

Malami said, “In 2013, there was an engagement by ALGON against the FG for the purpose of recovering the funds. These consultants delivered and they have not been paid for the services rendered. ALGON agreed and submitted to a consent statement of the court of law which gave rise to the liability.

“In 2019, the consultants approached the FG for their fees and the FG reached an agreement with the NGF who agreed to pay them. The NGF agreed that payments should be deducted from their paris club payment at the instance of the govs.

“Due to the amount being paid which is huge, the FG became suspicious which led to the investigations by the EFCC and the DSS over the payment.

“In 2017, the NGF and ALGON admitted the agreement and the liability which facilitated the payments. The implication of the FG being named as a party in the suit means the consequences was laid at the feet of the FG in an agreement by the governors; the NGF has been making periodic payments due to this.

“The NGF sent a letter of indemnity that they are liable for the payments in collaboration with ALGON. It is amazing that the Governors after agreeing with these claims are now objecting to these payments. This was after consenting to the judgement before the current administration came in place. You can’t deny a liability agreed to a decade ago; this is dishonesty.”

However, the NGF disputed these claims by Malami during an interview on AriseTV on Thursday.

Abdulrazaque Bello-Barkindo, the NGF’s Head of Media and Public Affairs criticised the AGF for preempting the ongoing investigations by resorting to the court of public opinion.

Bello-Barkindo explained that after the initial payments were made, some suspicious consultants demanded to be paid which led to the NGF deciding to undertake a forensic audit.

According to him, the AGF ought to be on the side of the masses while awaiting the investigations from the forensic audit.

“The NGF noted that one of those cases is questionable with payments to be rescinded which is why the AGF ought to support the masses.

“There is no time limit to protest cheating. The AGF didn’t make a good case by blaming the NGF for complaining that the payment is not necessary. Several NGFs have come and gone who give advices based on their understanding of the issue and the current NGF noticed slime discrepancies which is now in court. If the court proves there is no liability, we won’t pay them.

“We have been asking the contractors to come and verify that we need a forensic audit which has been turned down because they have the AGF on their side. Once the money has been paid, the states will be in a very difficult place and the monies cannot be retrieved.

“Curiously, some of the old consultants came with new demands which were suspicious and led to the suit by the NGF. The NGF is investigating to ensure they are genuine and for the AGF to think they deserve the payment regardless is inexplicable. The NGF is asking for a forensic audit to ensure the right payments are done. We can’t give them money ahead of the audit and the agf is saying it does not matter.

“The case is in court and the AGF is going to the court of public opinion to undermine the governors. He has probably exhausted his power and he is running to the public for adjudication.”