Home » International » MALAWI: 12 suspects arrested in connection with stoning which led to death of policeman 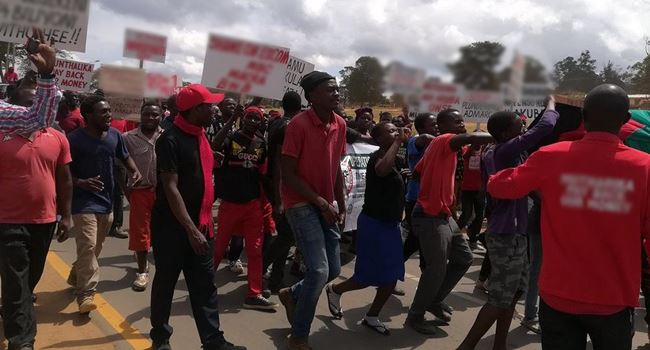 No fewer than 12 anti-government protesters have been arrested in Malawi in connection to the stoning of a police officer to death, during clashes with demonstrators.

The policeman was stoned to death after he joined other officers to confront anti-government protesters in Msundwe – a trading outpost west of the capital city, Lilongwe.

According to police spokesman James Kadadzerab, the police officer identified as Usumani Imedi was stoned to death and “killed by rioters and criminals” during Tuesday’s clash.

Kadadzerab said the deceased policeman was among officers who confronted demonstrators who had blocked the main road in Msundwe, an opposition stronghold.

Homeland Security Minister Nicholas Dausi said that other road users had asked for the police to intervene after the protesters blocked the busy road.

“When the police arrived, they started stoning them to the extent that we have lost one police officer”.

Police fired teargas to disperse the demonstrators but they “kept regrouping and they fought back with stones… in the ensuing chaos, they cornered one policeman whom they stoned to death,” an eyewitness revealed.

The incident was condemned by President Mutharika later held his rally in the capital and appealed for calm in the country, saying:

“This is our country. Let’s not burn it down.”