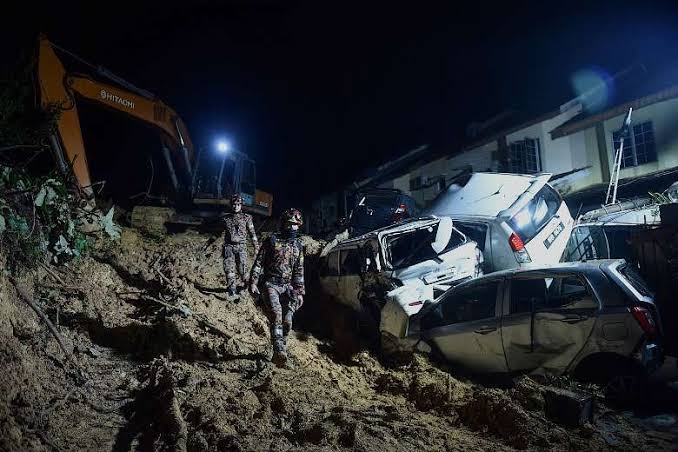 Four people have been killed while an unspecified number have been declared missing after a “massive” landslide triggered by “unusual” heavy rains buried their homes in a township outside the Malaysian capital, a senior rescue official said Friday.

Malaysia has been experiencing heavy rains over the past few weeks, which officials and environmentalists say is unusual at this time of year and could be the result of climate change.

Norazam Khamis, the emergency services chief of Selangor state, said the landslide happened in the suburb of Ampang on Thursday night.

Khamis said torrential rains lasting 30 minutes caused a nearby hill to erode, sending tonnes of soil mixed with water crashing down on a row of houses below.

“It happened so fast. The victims were found buried under about two metres of mud and they could not escape in time,” Khamis said.

“The mudflow completely destroyed two houses and damaged almost a dozen other homes. Ten vehicles were also damaged,” he added.

Khamis described the rains in Selangor, located outside the capital Kuala Lumpur, as “unusual” during what should be the dry season.

“Two to three years ago, it is usually hot during this period. The climate change could be a contributing factor,” he said.

“With the intensity and frequency of rainfalls we are seeing, we cannot rule out the role climate change is playing,” Meenakshi Raman, president of environmental group Friends of the Earth, said.