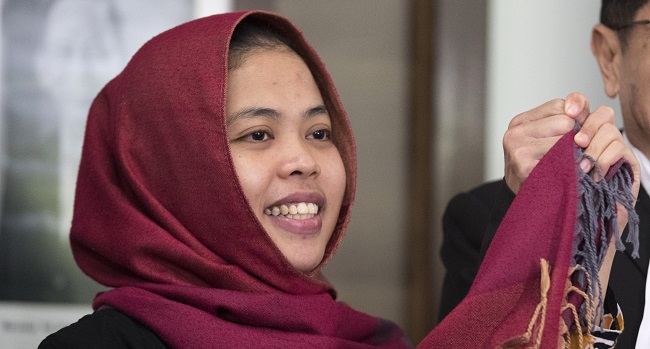 Prosecutors at Shah Alam High Court in Malaysia have withdrawn charges against an Indonesian woman, Siti Aisyah for the murder of Kim Jong Nam, the half-brother of North Korean leader Kim Jong Un.

She was set free on Monday after she and her co-defendant Doan Thi Huong were allegedly charged with using a deadly nerve agent to kill Kim Jong Nam.

According to her lawyer Gooi Soon Seng, Aisyah is expected to return to her home country later in the day.

He disclosed that prosecutors had given no reason for their decision and trial would continue next Thursday for Huong of Vietnam, which will determine whether prosecutors will continue with the case against her.

Aisyah and Huong were charged with the murder of Kim Jong Nam in February 2017, after exposing Kim to the nerve agent VX as he entered Kuala Lumpur International Airport which killed him in minutes.

Their lawyers said Aisyah and Huong were duped by a team of North Korean agents, who tricked them into believing they were taking part in a reality TV show.

While North Korea has consistently denied involvement in the killing, It’s unclear why Kim Jong Nam was killed, but analysts say Kim Jong Un may have seen him as a potential threat.

Nigerian passenger aboard Delta Airlines dies during flight to Lagos