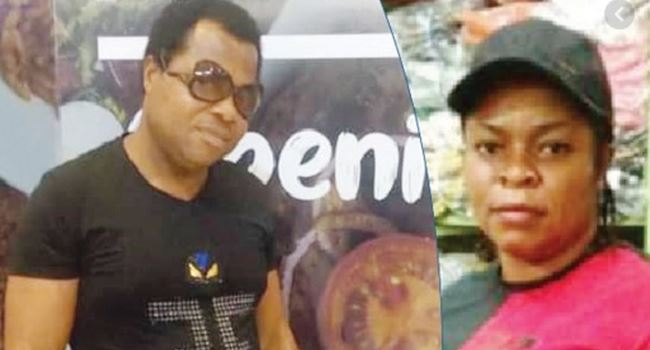 The Lagos State Police Command has declared a trader, Ifeanyi Nwagboroga, wanted for allegedly butchering his live-in-lover, Faith Ebubeeze, at their residence located on Adekunle Street, Oshodi, over her refusal to give him the sum of N400,000.

According to the police, Nwagboroga reportedly used a cutlass to hack down Ebubeeze on November 24, after which he locked the body inside the flat and escaped.

The deceased sister who spoke on the incident, said Nwagboroga killed her sister because she refused to give him the sum of N400,000 that he had demanded from her.

She added that her sister had refused to give the trader the money following his refusal to marry her after three years of living together and that her refusal got him angry and he attacked her.

She further said that after dating and living together for a long time, her sister had insisted that Nwagboroga should go and see her parents and make moves to marry her in the proper way, but that he kept telling her he was not yet ready.

“My sister was killed by Ifeanyi because she refused to give him N400,000,” the sister began.

“They have been living together for over three years. I also lived with them and my sister used to tell me a lot of things about their relationship.

“It was my sister who rented the flat they lived and she was the one taking care of a lot of things, even though he also had his own business but he was not contributing to anything in the house.

“They started having issues when my sister told Ifeanyi that she was no longer getting younger and that they should either get married or go their separate ways. But Ifeanyi always told her he was not ready for marriage yet.

“So my sister gave him an ultimatum that he must go and see our parents or he should pack out of her flat. That was when Ifeanyi asked her to give him N400,000 so that he can rent an apartment but she refused.

“On the day Ifeanyi slaughtered my sister like a goat, I had gone to the market to buy some food items. When I came back, the door was locked and after knocking for a while and sensing there was something wrong, I raised an alarm and when people came and we broke the door, we saw that he had cut my sister to pieces.”

In a statement issued by the police, Adejobi said:

“On November 24, 2020, at about 10.45pm, one Emmanuel reported at the Akinpelu Police Station that one Faith Ebubeeze of Adekunle Street, Oshodi, and her partner, Ifeanyi Nwagboroga, of the same address, were having an argument after she returned from Arena, where she sold clothes.

“In the course of the argument, the man went into the kitchen, picked a knife and stabbed her to death.

“He cut off her two hands and stabbed her on every part of her body. He then locked the body inside the room and ran away.

“The Commissioner of Police, who condemned the act, has directed that the matter should be transferred to the SCIID for investigation.

“He further reiterated his commitment to work with other government agencies and various interest groups to reduce gender or domestic violence to its barest minimum.”

We did not appoint Governor Ganduje visiting Professor –American University