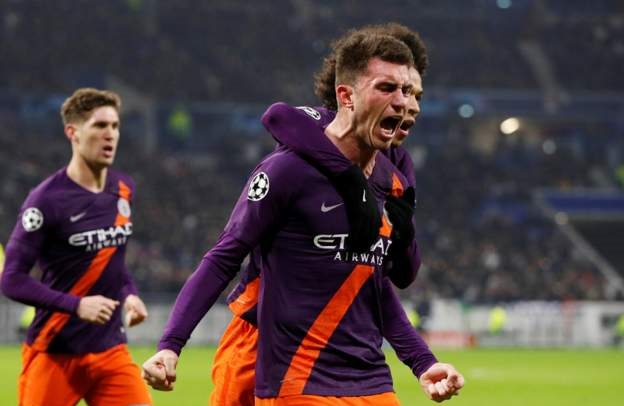 The hosts, who had defeated City in the reverse fixture in England, got ahead when Maxwel Cornet rifled in an angled drive early in the second half.

Aymeric Laporte steered in Raheem Sterling’s free-kick seven minutes after, but Cornet scored his second of the night to restore the lead for Lyon.

Sergio Aguero saved the day for City as he flicked in a header seven minutes to time to send the Pep Guardiola side to the knockout stages.

In the other Group F match, Shakhtar Donetsk defeated Hoffenheim 3-2 in Germany to keep hopes alive of reaching the last 16.

The Switzerland side held their hosts goalless for 90 minutes, and a draw would have put United on pressure ahead of their final group game at Valencia.

But Fellaini came to the rescue on 91 minutes when he collected Luke Shaw’s pass in the box, held off Loris Benito and turned to fire into the bottom corner.

Valencia were beaten 1-0 by Juventus, who sit atop the Group H, in the other match of the group.

Defending champions, Real Madrid defeated AS Roma 2-0 in Italy. Both sides have however qualified for the knockout stages, as CSKA Moscow were beaten 2-1 at home by Viktoria Plzen.

Both Bayern and Ajax are already in the last 16, while Benfica will relegate to the Europa League after finishing third in the group.