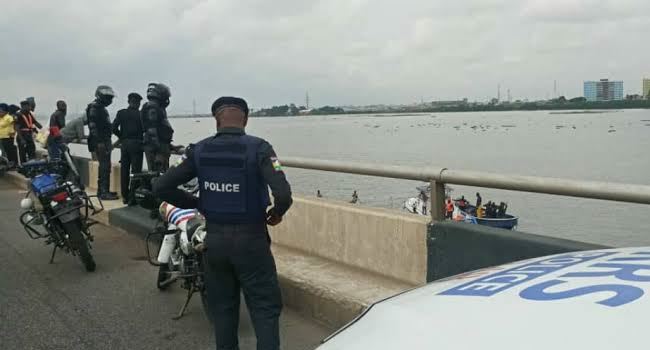 The latest young man to jump into the Lagos Lagoon in a bid to commit suicide has revealed that he did so because his girl friend said she was no longer interested in their relationship.

The young man, whose name was given as Princewell David, made his intention known to the police after he was rescued on Thursday, February 27, by some officers and local fishermen.

The Lagos State police command spokesperson, Bala Elkana, who made this known to newsmen said that the young man jumped from the third mainland bridge into the Lagos Lagoon.

Bala said, “We have a report of a man, who jumped into the lagoon. He ordered an Uber vehicle and on getting to the Third Mainland Bridge, he told the driver that he wanted to urinate, but the driver, who remembered what happened recently, did not stop for him.

“He kept on mounting pressure on the driver, but the driver managed to drive to where our men were stationed to explain to them, but before he could do that, the passenger had jumped into the lagoon, but he was rescued by our marine police and local divers.

“David said he jumped into the lagoon because his girlfriend said she was no longer interested in the relationship.”

Princewell was said to have picked the Uber taxi from the Igando area and was heading to the Island.

In recent times, many people have committed suicide by jumping into the lagoon and into other waters in Lagos State.