Man who trekked for Buhari gets car, N2m, after crying out for help | Ripples Nigeria 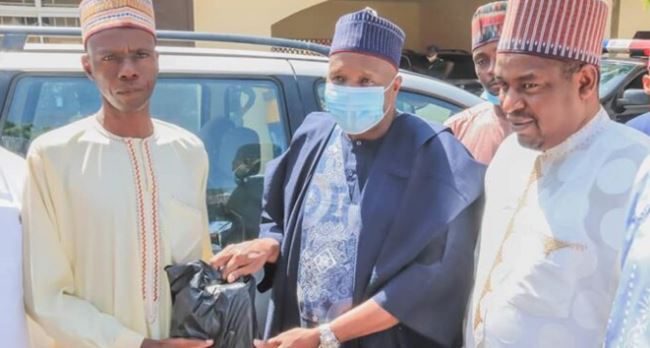 A 50- year-old man, Dahiru Buba, who trekked from Gombe State to Abuja in honour of President Muhammadu Buhari following his victory in 2015, has been given a car gift and the sum of N2 million by the Gombe State Governor Inuwa Yahaya, after he cried out for help.

Buba, a native of Dukku local government area of the state, received the gifts on Monday, November 16, when the Governor invited him to the government house after news went round in the media that Buba had been suffering untold hardship with his limbs unable to carry him.

In an interview he granted a media outlet in the state, Buba had lamented that he and his family were suffering as he has no job to take care of his two wives and seven children.

Buba also said that he had embarked on the ‘journey’ to honour Buhari because “he is a man of integrity and a lover of the masses,” after the President defeated then Presiden Goodluck Jonathan in the 2015 presidential election.

He added that despite the fact that he expected to be rewarded for his ‘noble deed’, what he got was only N10,000 as transport fare back to his village, and a certificate for his feat.

He also mentioned that he had lived with the illness caused by the trekking for more than three years and had to cry out to public spirited Nigerians to come to his aid.

Upon hearing Buba’s lamentations, Governor Yahaya invited him to the government house and gave him a car and the sum of N2 million as a reward for what the Governor termed the “Great Trek.”

The Special Assistant to the Governor on Media, Ismalia Mislli, quoting the Governor, stated that no genuine effort or sacrifice will go unrewarded no matter how long it takes.

“For taking the pains and risks to show solidarity with Mr. President and our great party, people like Buba should not be neglected.

“By embarking on that solidarity trek, Dahuru Buba had shown patriotism and support; he should therefore be appreciated and encouraged.

“So, on learning about his condition, first I directed that he should be taken to the hospital for proper medical attention and I am happy that he is now better after undergoing his first round of treatment.”