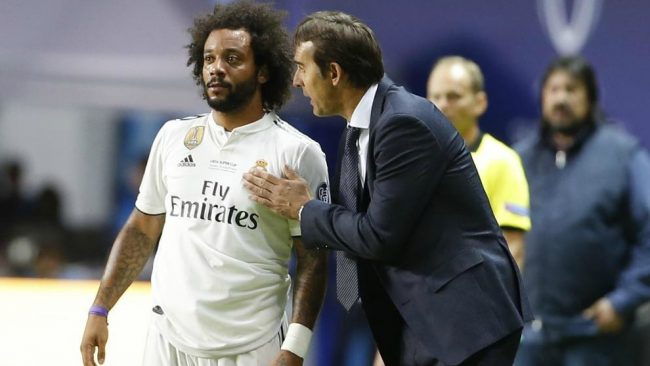 Real Madrid defender Marcelo made known his support for coach Julen Lopetegui after the European champions secured their first win in six games on Tuesday night.

Lopetegui, who took over the managerial position at Bernabeu after Zinedine Zidane stepped down at the end of last season, has been under criticism as his side are currently 7th in La Liga.

Speaking after their 2-1 win in a Champions League clash against Viktoria Plzen, Marcelo says the coach is wonderful and believes he is doing a great job with the team.

He went on to accuse journalists of being jealous ‘because they don’t know how to play football’.

“I feel good right now. I took a heavy blow. The challenges I received can’t be let off. The referees have to see them,” he said, referring to the knock he picked up in the second half.

“Lopetegui is wonderful. For me, he’s doing a great job. It’s hard when you don’t win but it’s you [journalists] who speak of a crisis.

“You all try to hurt this dressing room. It stems from jealousy because you don’t know how to play football.

“I dedicated my goal to [fitness coach Antonio] Pintus because I like him, plus he doesn’t have hair and I do.”

Asked if he has intentions of leaving Real Madrid, he said: “I haven’t heard about any offers. No-one’s more of a ‘madridista’ than I am.”

Real will travel to Camp Nou this weekend where they will face rivals Barcelona in the first El Clasico of the La Liga season.