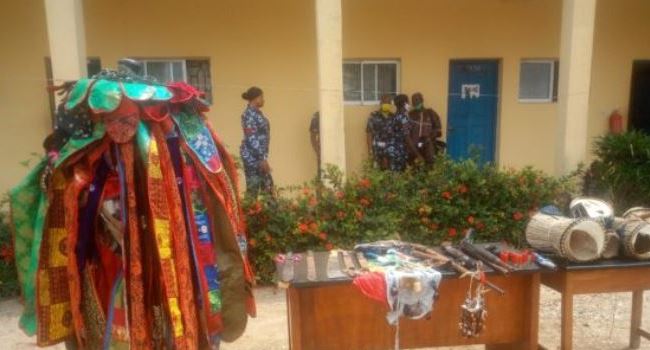 The Osun State Police Command has arrested a popular masquerade and six of its cohorts in the state for allegedly fomenting trouble and causing a commotion which caused injury to a victim.

The arrest of the masquerade and six others including; Fagbemi Ajao, Ifaseun Gbadebo, Olubayo Ayantunde, Taiwo Ayandare, Taiwo Ayandare and Ayankunle Mutiu, was confirmed on Monday by the Commissioner of Police in the state, Undie Adie.

According to Adie, items including; charms, one cut-to-size barrel gun, one Dane gun, two cutlasses, local axes and four talking drums were recovered from the suspects whom he said would not go unpunished.

Eyewitness said that when the masquerade came out, there was pandemonium in the town as those following the masquerade were bearing different dangerous weapons causing pandemonium which led to the wounding of one Mukaila Ismaila who was rushed to the hospital.

The matter was later reported to the police and when they arrived at the scene the hoodlums accompanying the masquerade engaged the policemen in a gun duel but were later overpowered and arrested.

LIFTING OF BAN ON INTER-STATE TRANSPORT: NURTW calls on FG to subsidise fares, or else…