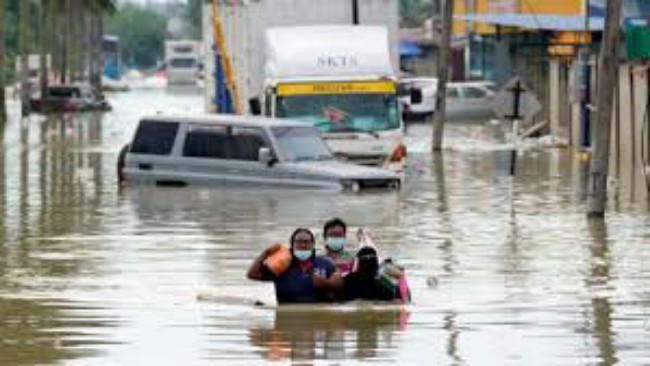 Not less than eight people have been found dead, with about 41,000 others displaced in massive floods that ravaged Malaysia over the weekend, authorities said on Tuesday.

The situation has led to the government facing criticism from the public and opposition lawmakers over its slow rescue efforts.

Though floods are common on the eastern coast of Malaysia during the annual monsoon season between October and March, critics say the government did not take proactive measures to prevent them, neither was there a clear rescue plan in place, local media quote prominent opposition figures.

The Malaysian government has mobilized its army and other security agencies across seven states, with the worst flooding in Selangor, the country’s wealthiest and most populous region.

Selangor police reported eight people were found dead in the floods late on Monday, according to state news agency Bernama.

The dead include four in Taman Sri Muda, a neighbourhood in the district of Shah Alam, where many people are still believed to be trapped in homes and apartment buildings as rescue efforts were hampered by a lack of boats and manpower.

“It is unclear how many more remain to be rescued with communication lines cut off in many parts of Selangor.

“More than 41,000 people across the affected states were displaced by the flooding, and 10 others are reported missing, including a six-year-old child,” Bernama reported.

Prime Minister Ismail Sabri Yaakob has announced $23 million in aid for post-flood recovery efforts, adding, “Rainfall like this happens only once in a 100 years.