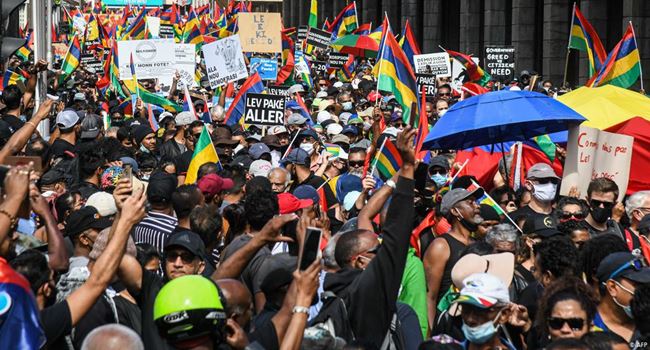 There was a mass protest in Mauritius on Saturday as thousands of citizens stormed the capital Port-Louis, calling for the government to resign over alleged corruption and fraud.

The demonstrators who heeded the calls of opposition parties to call into question the responsibility of those who hold political power, reportedly marched up to the office of Prime Minister Pravind Jugnauth, carrying different placards to register their displeasure with the government.

“Crimes, drugs that wreak havoc, there is no transparency. We cannot say that we live in a democracy,” one of the leaders of the protest was heard saying.

“I’m here because I want there to be a change. If I stay at home there will be no change,” another echoed.

“All these parties that have governed us have ruined our lives, If we are in this current situation, it is because of these political parties which have governed us for the last 50 years. So my presence here is to be in solidarity with the whole Mauritian Nation, to say “NO” to these mafia systems,” another protester said.

The government is also facing criticism over its lack of transparency, and mismanagement of a massive oil spill involving a Panamanian-flagged MV Wakashio ship which ran aground in July, spilling 1,000 tonnes of fuel near two environmentally protected marine ecosystems and the Blue Bay Marine Park reserve.

The protesters, according to reports, numbered about 25,000, the largest major rally that the small island African nation had seen in over 40 years.

Mauritius is currently on the European Union’s blacklist of third world countries that pose a risk to the bloc due to its anti-money laundering deficiencies.

The island nation is also under pressure with the coronavirus pandemic and its effect on tourism.

Related Topics:Mauritiusprotests in Mauritius
Up Next