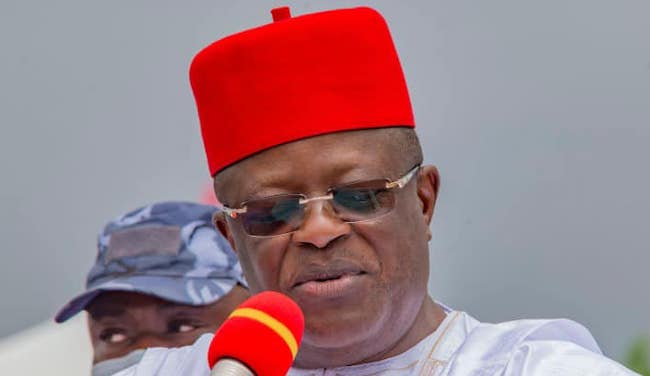 The Movement for the Actualisation of a Sovereign State of Biafra (MASSOB) has slammed the Ebonyi State Governor, David Umahi over claims that the Ndigbo do not want the creation of a Biafra State.

This was stated by the MASSOB’s Director of Information, Samuel Edeson, during an interview with AriseTV on Wednesday.

Ripples Nigeria had reported that Umahi stated that the elites in the region were not interested in the ongoing secessionist agitation by IPOB and MASSOB which might birth other feeder groups as insecurity in the region spirals.

However, Ederson noted that the elite in Igbo land represented only one per cent of the population in the region, while noting that 99 per cent of Ndigbo wanted to leave the country.

“What I want you to know is that 99 per cent of Ndigbo want to leave Nigeria. So, he (Umahi) is just saying this because he wants to please his masters, his cabal that controls Aso Rock because of his political ambition, come 2023. He can say anything in order to please his masters.”

On a possible emergence of a counter-secessionist group, the MASSOB spokesman said, “Dave Umahi and some South-East governors (I mean some, not all of them), have arranged and organised some thugs which they want to use as opponents to Biafran agitators or IPOB. We are not surprised. Whenever you have an original, there is always a counterfeit.

“Those who will come to protest against IPOB or against Biafran agitators are paid agents to destabilise Biafraland and the Igbo land in particular.

“Umahi cannot stop it (Biafra); he is only the governor of Ebonyi State and not the governor of Igboland. That he is given the power of governor does not give him the power to control other things, and as a matter of fact, he can only control his state, if possible.”