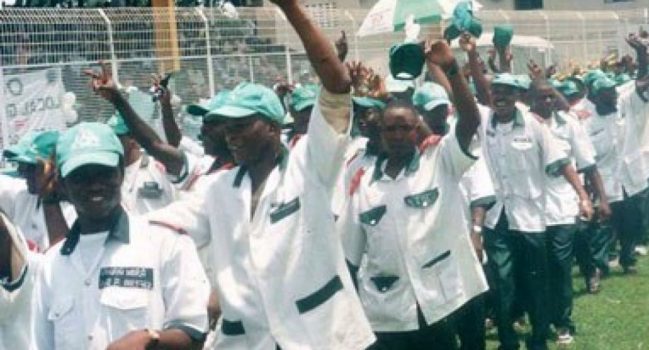 There was pandemonium and mayhem as two rival groups of the National Union of Road Transport Workers (NURTW), clashes in the Obalende area of Lagos State in the early hours of Thursday, February 11, with sporadic gunshots rending the air.

Though the cause of the clash which started around 7:30 am, has not been ascertained, witnesses reveal that the ever busy area has been thrown into confusion as motorists, passengers. residents and passersby were seen scampering for safety.

It was also reported that several cars and properties were destroyed in the chaos as scores of people sustained different degrees of injuries.

Amid the clash, motorists and residents have been advised to take alternative routes, pending the arrival of security personnel.

Some Nigerians also took to Twitter to pass a warning to anyone with the intention of passing through the axis to beware and make a detour. Videos of the chaotic situation have also been trending on Twitter.

A Twitter handle with the name @Inside Mainland shared a video of the situation with the caption:

@InsideMainland: “The mayhem that was Obalende this morning.”

Another Tiwtter user with the handle @DE_COMMUNICATOR also shared a video and captioned it:

“Insecurity in Lagos has skyrocketed. Especially on the Island. Crazy shooting by NURTW guys going on at Obalende. This is just after about four days of shootings at Adeniji Adele. Thank God for life.”

Yet another Twitter user, with the handle @ JUST IN wrote:

“Sporadic shootings rocks #Obalende area in #Lagos this morning as rival NURTW groups are reportedly fighting each other and freely using dangerous weapons & firearms. Extreme caution is advised in the general area.

“I was on my way to Obalende 30mins ago. I just took a detour elsewhere and decided to go to CMS from there since CMS seem closer. I had no idea anything was happening there. May God continue to save us/”

However, the Nigeria Police Force Complaint Response Unit (NPF-CRU), says the situation has been brought under control.

In a tweet from its handle, the NPF-CRU wrote:

“DPOs and other policemen are on ground addressing the situation. Thank you for contacting NPF-CRU.”