Home » Latest » Media reports are ‘not balanced’, the violence in Southern Kaduna involves ‘both sides’ —Army 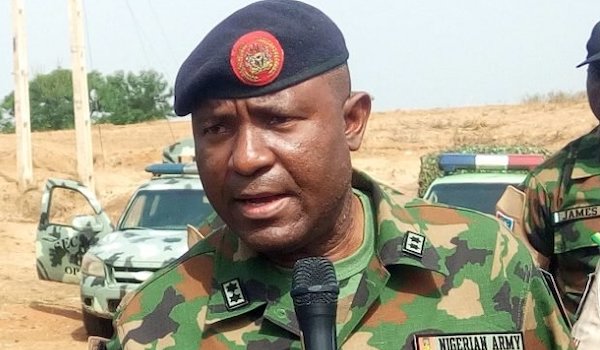 The Nigerian Army on Tuesday described the ongoing violence in Southern Kaduna as reprisal attacks carried out by Kataf youths, Fulani militias and the criminal elements in the area.

The Commander of Operation Safe Haven, Chukwuemeka Okonkwo who disclosed this to journalists at the end of a security meeting held at the Government House in Kaduna Tuesday, dismissed reports the violence was ethnic cleansing.

The meeting was attended by Governor Nasir El-Rufai and representatives of security agencies in the state.

More than 50 persons have been killed in Southern Kaduna in the last few weeks.

Okonkwo said: “What we have were attacks on some communities and reprisal attacks.

“The reports are not balanced. Perhaps, most of the media houses don’t know, both sides are actually involved.

‘’You have Kataf youths, Fulani militias and the criminal elements of both sides. Some people are also leveraging on the security situation to perpetuate their criminal activities, aside communities involved in the crisis.

“Any incident is enough to spark off crisis in that area. There have been lingering disputes, animosities, banditry and cattle rustling there.’’