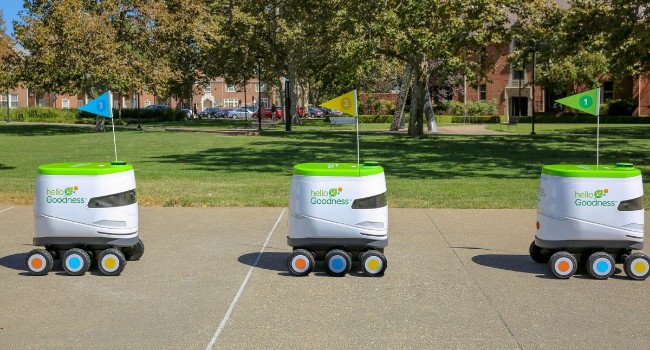 PepsiCo has announced that it will be rolling out a fleet of snack-carrying robots on the University of the Pacific’s campus in California.

Students can place their orders on the iOS app and have them delivered to select locations around the 175-acre campus between 9AM and 5PM.

The snackbots are nearly identical to the other delivery machines we’ve seen before. They can travel 20 miles on a single charge, and they have headlights and a camera. Once the students meet the robot, they open its green lid and grab their order.

PepsiCo said it was the largest food and beverage company on the market that has begun to deliver snacks and drinks by way of robot.

Last year, Kiwi spearheaded a similar service at UC Berkeley, and students at the university adored the robo-couriers so much that when one caught on fire due to a battery malfunction, they held a candlelight vigil for the device.

According to The Daily Californian, students on Facebook called the robot a “hero” and a “legend.”

The ordering app is available on iOS with a valid University of the Pacific email address.