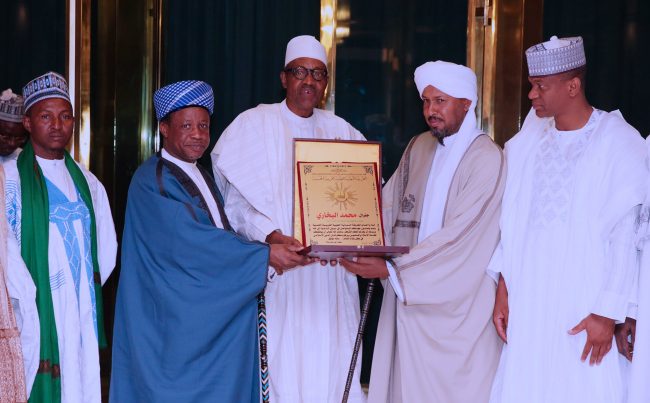 While meeting with some muslim leaders on Tuesday, President Muhammadu Buhari reiterated his administration’s commitment to peaceful coexistence and inter-religious harmony, stating that “You can’t kill to please God; and I know no religion tolerates the taking of another person’s life in the name of a religious movement”.

Speaking at separate meetings with the Qadiriyya Muslim Movement in Africa and the Izalatul-Bid’a-Wa-Iqamatus-Sunnah at the State House in Abuja, President Buhari said anyone, or group of persons who preach and perpetrate violence against others lacked true understanding of God’s principles.

“You can’t kill to please God; and I know no religion tolerates the taking of another person’s life in the name of a religious movement.

“There is never a justification for killing any member of the society. We have been tackling the Boko Haram menace, and we have made significant impact, and we will extend the measures to stop all wanton killings,’’ he said.

Buhari said that the state of security would be regularly reviewed to check threats to the peaceful co-existence of all Nigerians, and ensure the safety of lives and property.

He told the delegation that the All Progressives Congress (APC) campaigned on three issues— security, corruption and the economy—noting that his government had been consistent in ensuring that it provided adequate security, fought corruption and stimulated the economy for creation of jobs.

“Our priority is to also ensure that everyone in the country has something to eat. We are really concerned about the underprivileged.

“Graciously, God has been hearing our prayers. In the past two years, we have had bountiful harvest due to favourable conditions. All over the country, we have reports of farmers posting good harvests”, he said.

On corruption, the president said security agencies would continue to broaden their work to ensure that sanity was restored in public offices.

“Justice will be done to all in the war against corruption. As religious leaders, I urge you to reach backwards to your followers to respect the rights of others. Those that stole from the public can no longer sleep well in the country today. When they run abroad, they cannot take their landed assets with them. We will, in all cases, have them return what they looted,” he said.

In his remarks, the leader of Qadiriyya Muslim Movement in Africa, Keribullah Nasir Kabara said the movement would continue to keep the president in prayers for good health and longer life to pursue the cause of building a stronger nation that catered for all citizens.

He said the reports of improved security in the North East and better harvests for farmers across the nation were clear signs of God’s favour on the government, urging the president to continually look unto God.

The Sheikh said the improved security situation in the country made it possible for 10 million members of Qadiriyya, from many parts of Africa, to gather in Kano for some days for the commemorative birthday of the founder of the movement without a single incident.

On his part, the leader of the second group of Ulamas, Bala Lau, commended the ongoing drive for infrastructural development in the country by the administration.

He urged President Buhari to continue to remember the masses who looked up to him to champion their cause.