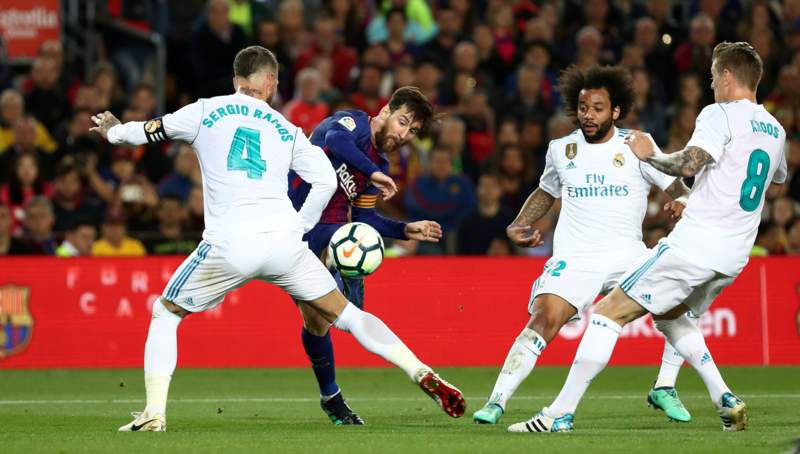 Lionel Messi and Cristiano Ronaldo were both on target as Barcelona and Real Madrid drew 2-2 at Camp Nou in the second El Clasico of the league season.

Luis Suarez volleyed home to open the scoring 10 minutes into the game but his effort was cancelled by Ronaldo just four minutes after.

Barca were reduced to 10 men as Sergi Roberto was shown red before halftime, after he appeared to slap Real defender Marcelo; while Ronaldo was substituted at half-time after suffering an ankle sprain while scoring.

Messi then put the hosts ahead again early in the second half but Gareth Bale scored on 72 minutes to level both sides again.

The result means Barcelona have now extended their unbeaten La Liga record to 42 games – a run stretching back to April 2017.

They are on the verge of becoming Spanish invicibles!

Barcelona’s final three games – as they look to become Spain’s Invincbles – are Villarreal at home on Wednesday, Levante away next Sunday and then Real Sociedad on the final day.

Messi is leading scorer in La Liga with 33 goals this season, and his goal on Sunday was his seventh at Camp Nou in El Clasico encounters, surpassing Real legend Francisco Gento who has six to his name.

Ronaldo also equalled Alfredo di Stefano as the all-time Real Madrid top-scorer in El Clasico in all competitions after scoring his 18th goal in the fixture.

Meanwhile, Real have now failed to beat Barca in the past four league attempts.

Moses fired up for Huddersfield clash after ‘big win’ over Liverpool