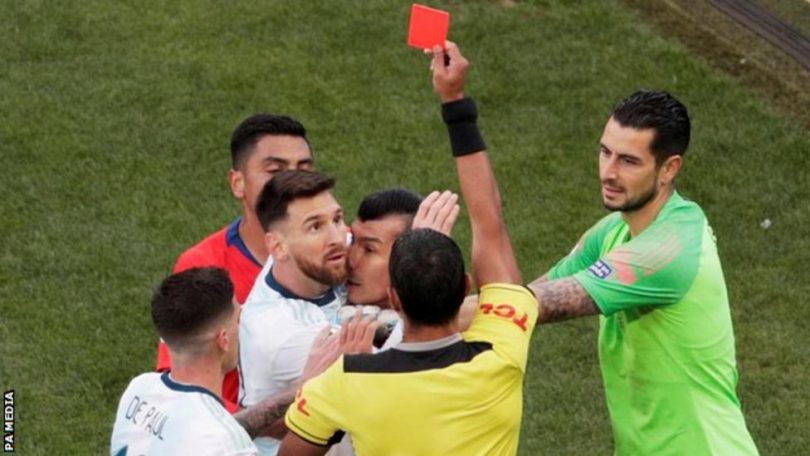 Barcelona star, Lionel Messi was shown a red card during the Copa America third-place play-off between Argentina and Chile on Saturday.

Messi and Gary Medel were sent off in the 37th minute of the game, but Argentina went on to beat the Chileans 2-1 to win bronze.

Chile had also lost Alexis Sanchez to a hamstring injury early on.

With tension already building some minutes before halftime, Messi appeared to nudge over Medel as they both challenged for the ball.

Medel responded by forcibly pushing his face into Messi’s as the two players argued before the referee arrived and dismissed them both.

Messi has never been sent off in his club, and has before now only seen a red card once in his entire career – during his international debut 14 years ago.

The Barcelona forward had provided the assist for Sergio Aguero’s opener in the 12th minute before Paulo Dybala made it 2-0 10 minutes after.

Both sides were then reduced to 10 men each, before Arturo Vidal scored a second-half penalty to pull one back for Chile.

But Argentina held off the fightback to secure victory.

Hosts Brazil will take on Peru in the Copa America final on Sunday.