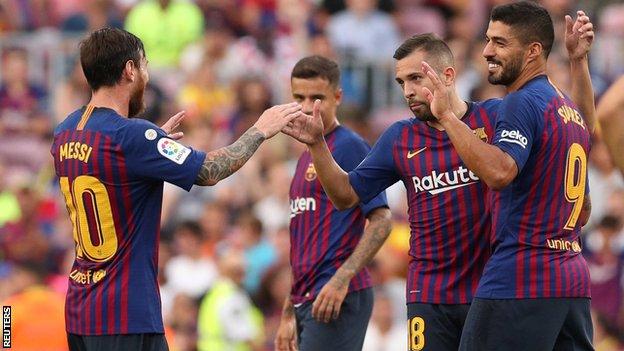 Lionel Messi and Luis Suarez both scored twice as Barcelona thrashed minnows Huesca 8-2 in a La Liga encounter at Nou Camp on Sunday.

Huesca, newcomers in the Spanish topflight, took an early lead through 19-year-old Cucho Hernandez but Messi levelled with a good finish after skilfully moving into the box.

The Argentine added a second on the counter-attack, as well as assisting two goals.

Jorge Pulido scored an own goal to put Barcelona ahead before Suarez scored his first of the night.

Alex Gallar then pulled one back for the visitors, before Barca got so rampant after the break, with Ousmane Dembele, Ivan Rakitic and Jordi Alba also finding the back of the net.

Messi scored his second of the night, and could have had a hat-trick when Barca won a late penalty, but he let Suarez take it.

With the win, Barcelona are level with Real Madrid at the top of La Liga table on nine points having not lost any point from their three games so far.

Meanwhile, Huesca have only lost for the first time in La Liga.

Serena through to US Open quarterfinals, to face Pliskova