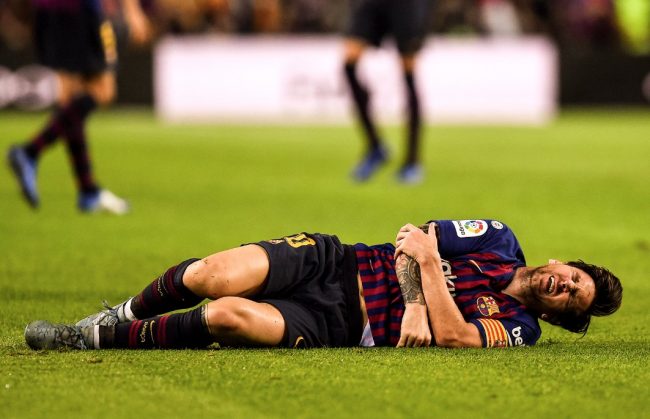 Lionel Messi will be unavailable for next weekend’s El Clasico after an injury he suffered in Barcelona’s 4-2 win over Sevilla on Saturday night has ruled him out for three weeks.

The Argentine was involved in the first two goals for Barcelona but was subbed off injured as his side triumphed over their visitors to go top of the La Liga table.

Messi, who was handed the award for best La Liga player of September before kick off, played only for 15 minutes after assisting Philippe Coutinho for the opener in the 2nd minute and doubling the lead in the 12th.

Barcelona confirmed after the game that the 31-year-old suffered a “fracture of the radial bone in his right arm” and is set to miss the Champions League tie against Inter Milan in midweek and the clash with Real Madrid next Sunday.

Despite the injury to Messi, the hosts extended their lead in the second half through a Luis Suarez penalty.

But Sevilla pulled on back from a Pablo Sarabia’s deflected long-range effort, before Ivan Rakitic’s fine volley restored the three-goal lead in the 88th minute.

Substitute Luis Muriel then curled home an impressive effort in injury time but Barcelona held on to secure their first win in five La Liga matches – a result that puts them one point clear of Alaves at the top of the table before next week’s huge game at the Nou Camp against rivals Real Madrid.