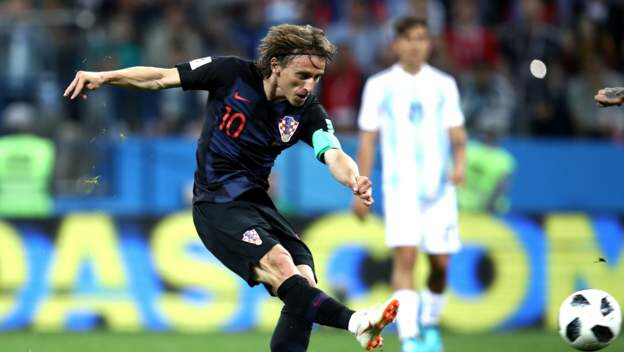 Argentina superstar Lionel Messi failed to impress as his side fell 3-0 to Croatia in a 2018 FIFA World Cup group D clash in Nizhny Novgorod on Thursday.

Having drawn 1-1 in their first game against Iceland last week, the Argentines needed to win to boost their chances of qualifying for the next round.

But a goalkeeping howler from Willy Caballero early in the second half saw Croatia take the lead.

The keeper received a backpass, tried to clip a little ball out to a defender and only succeeds in dinking the ball up in the air, straight to Ante Rebic who then volleyed in.

Argentina made changes, brought in more forwards in Paulo Dybala and Higuain, but it made no difrerence for the South Americans as they failed to take their chances upfront.

Croatia doubled their lead on 80 minutes when Real Madrid midfielder Luka Modric fired a shot from outside the box into the net to the amazement of everyone.

It was not over still, as Barca forward Ivan Rakitic added to Argentina’s pains by scoring another in injury time.

Croatia are through to the second round, and will likely play France or Denmark in the last 16.

The Super Eagles of Nigeria will take on Iceland in the other game of the group on Friday.