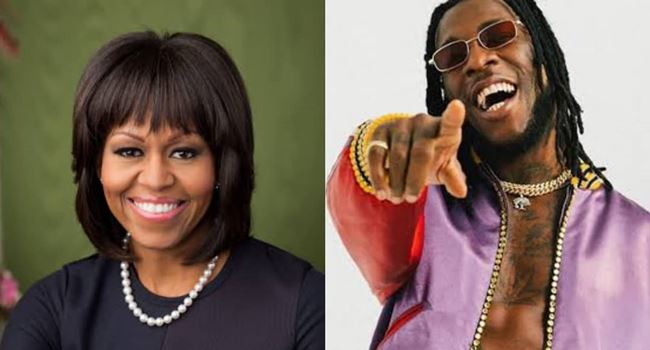 The former First Lady of the United States of America, Michelle Obama has revealed that Burna Boy’s track ‘My Money, My Baby’ is one of the songs that gives her an extra boost when she is working out in the gym.

Michelle revealed this in a Twitter post on Sunday when she shared her go-to #WorkoutPlaylist with Burna Boy song listed as the only indigenous Nigerian singer whose track made her collection.

“It’s about that time when New Year’s resolutions get a bit harder to stick to. To offer a little inspiration, I want to share my go-to #WorkoutPlaylist with you. These songs always seem to give me that extra boost to get through my toughest workouts. What’s on your playlist?” Michelle Obama tweeted.

The other Nigerian on Michelle’s list is Tobe Nwigwe’s “I’m Dope” featuring David Michael Wyatt. Though Tobe was born in Alief, Texas, a suburb of Houston, and is married to an African American woman, he’s of Nigerian descent.

READ ALSO: Oluwo places curse on those judging him over his marital crisis

The development comes about a month after her hubby Barack Obama released his favorite tracks of 2019 continuing in his tradition of sharing his year-end lists of his favorite books, films and music.

The former president who took to his official Twitter handle, @BarakObama to share his playlist for 2019 listed ‘Anybody’ by Burna Boy and ‘Iron Man’ by Rema in his favorite music alongside 33 other tracks. 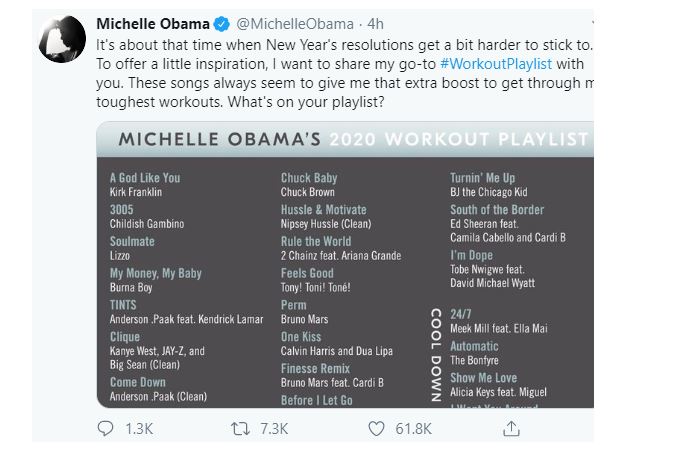