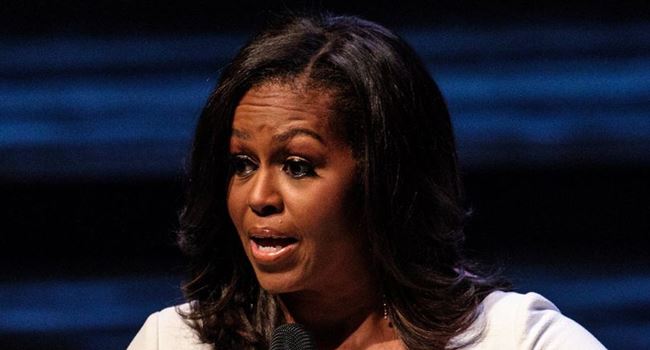 Former First Lady of the United States, Michelle Obama, has blasted President Donald Trump, calling him an unpatriotic and infantile American who is bent on destroying everything the country stands for because of his selfish aims.

Michelle made the comments on Twitter following the Capitol Building riots which broke out on Wednesday when Congress leaders sat to certify Democratic candidate, Joe Biden’s presidential win in the November 3, 2020 elections.

In a series of tweets on Friday, January 8, the former First Lady urged Silicon Valley companies like Facebook, Twitter and Instagram who already banned Trump from using their platforms, to also ban all leaders of nations who use the social media to fuel insurrection.

In one of the tweets, she wrote:

“Like all of you, I watched as a gang-organised violent, and mad they’d lost an election, laid siege to the United States Capitol. They set up gallows. They proudly waved the traitorous flag of the Confederacy through the halls. They desecrated the centre of American government.

“And once authorities finally gained control of the situation, these rioters and gang members were led out of the building not in handcuffs, but free to carry on with their days. The day was a fulfillment of the wishes of an infantile and unpatriotic president who can’t handle the truth of his own failures.”

“And for those who call others unpatriotic for simply taking a knee in silent protest, for those who wonder why we need to be reminded that Black Lives Matter at all, Wednesday made it painfully clear that certain Americans are, in fact, allowed to denigrate the flag and symbols of our nation. They’ve just got to look the right way.

“I hurt for our country. And I wish I had all the solutions to make things better. All I know is that now is a time for true patriotism. Now is the time for those who voted for this president to see the reality of what they’ve supported, and publicly and forcefully rebuke him and the actions of that mob.

“Now is the time for Silicon Valley companies to stop enabling this monstrous behavior and go even further than they have already by permanently banning this man from their platforms and putting in place policies to prevent their technology from being used by the nation’s leaders to fuel insurrection.”

She implored all Americans to give the incoming administration of President-Elect Joe Biden, and Vice-President-Elect Kamala Harris, which takes office on January 20, the chance to lead the country in a better direction.

Like all of you, I’ve been feeling so many emotions since yesterday. I tried to put my thoughts down here: pic.twitter.com/9xzRvrpk7y