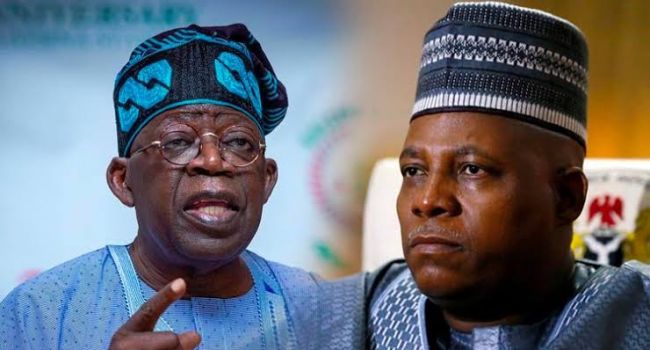 A coalition of groups in the Middle Belt known as the Middle Belt Congress, (MBC), has called on former Borno State Governor, Senator Kashim Shettima, to resign as the vice presidential candidate of the All Progressives Congress (APC), in the 2023 elections “to save the party from perceived impending electoral misfortune.”

The MBC, made this call at a press conference in Abuja on Wednesday, saying it was against the Muslim-Muslim ticket of the party which pairs the flag bearer, Asiwaju Bola Ahmed Tinubu and Shettima as it does not augur well for a multi-religious country like Nigeria.

While addressing the press conference, national coordinator of the group, Bilal Abdullahi, said if the APC goes ahead with the Muslim-Muslim ticket, the party could face a monumental loss.

“The Muslim-Muslim ticket of the APC comes with its attendant political baggage,” Abdullahi said.

“If the APC, as a party, is desirous of making any meaningful impact in the 2023 presidential elections, it behoves on the party to retrace its steps in the composition of its presidential ticket.

“We are constrained to believe that the self-confession of Senator Kashim Shettima towards the Christian community might be a ruse, as his actions of late do not indicate that of a religious tolerant individual.

“It remains a statement that since the nomination of Senator Kashim Shettima, the APC has evolved into a riotous organization with various stakeholders in abhorrence for the choice of a Northern Muslim at the detriment of credible and capable Northern Christians.

“We therefore call on Sen. Kashim Shettima to immediately resign as the APC running mate to save the party from perceived impending electoral misfortune.”