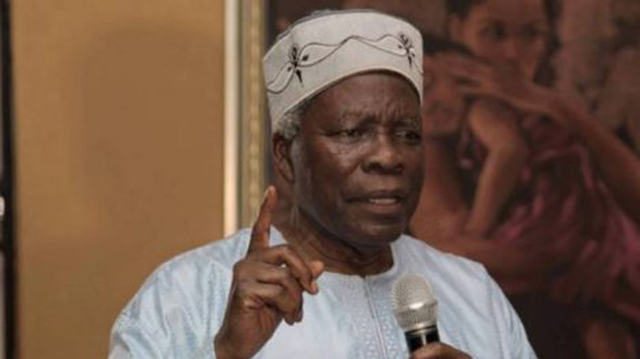 The alliance between the Middle Belt and Southern Nigerian secessionist agitators has run into troubled waters after one of the arrowheads of the self-determination coalition, Prof. Banji Akintoye, resigned as Chairman of the group known as the Nigerian Indigenous Nationalities Alliance for Self-Determination (NINAS)

Akintoye, who announced his resignation from the coalition in a statement on Tuesday, said the objectives of some leaders of NINAS were in total conflict with the group’s ultimate goal.

The renowned professor of History, who led other Yoruba leaders and the Illana Omo Yoruba to withdraw from the alliance, said it was imperative for the Yoruba bloc to quit the alliance in order to “preserve the integrity of those behind the Yoruba Nation agitation.”

The statement read: “In the light of the current development in the Yoruba self-determination struggle, especially, in Ilana Omo Oodua, it has become very necessary for the Yoruba people to dissociate themselves from the alliance known as NINAS with immediate effect.

“It is our well-considered opinion that some of those we align with in NINAS do not want the kind of self-determination that we the Yoruba people want.

“Therefore, we the leadership of Ilana Omo Oodua, wish to inform the general public that the Yoruba Bloc under the leadership of Ilana Omo Oodua Worldwide has moved out of the Nigerian Indigenous Nationalities Alliance for Self-Determination with immediate effect in order to safeguard the integrity and honour of our agitation for Self-Determination.

“It is now obvious to most people in the Yoruba self-determination struggle that the NINAS is not working in tandem with our objective in Ilana Omo Oodua.

“Furthermore, Ilana Omo Oodua hereby withdraws its membership of NINAS with immediate effect. All the Yoruba People Worldwide that believe in the agitation for Yoruba Nation Self-Determination at home and abroad are, by this statement, notified to comply.”