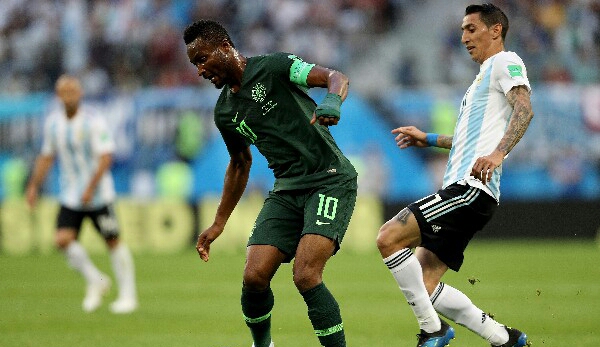 Following their exit from the 2018 FIFA World Cup, Super Eagles captain John Mikel Obi says most of his teammates are young and will be ready to play at the global stage in four years’ time.

The Eagles crashed out of Russia after falling to a 2-1 defeat against Argentina in final group D encounter in Saint Petersburg on Tuesday.

A late Marcos Rojo winner ended the hopes of the Super Eagles, who only needed a draw to qualify for the next round.

The next FIFA World Cup will be hosted in Qatar, and Mikel Obi believes the current crop of Super Eagles will be ready to face strong oppositions by then.

“We did everything we could,” Mikel said after the game.

“In the second half we pushed and pushed. It just wasn’t to be.

“It’s a young team and in four years most of them will be ready for this tournament.

“I’m very proud of the boys and what we have achieved. I think we have done really well. We have to keep going,” he stated.

Nigeria lost for the fifth time in their five meetings with the Argentines at the World Cup.

They finished third in the group with 3 points which they got from their 2-0 win over Iceland on matchday 2.

The last time Nigeria crashed out in the group stage was in 2010 in South Africa.