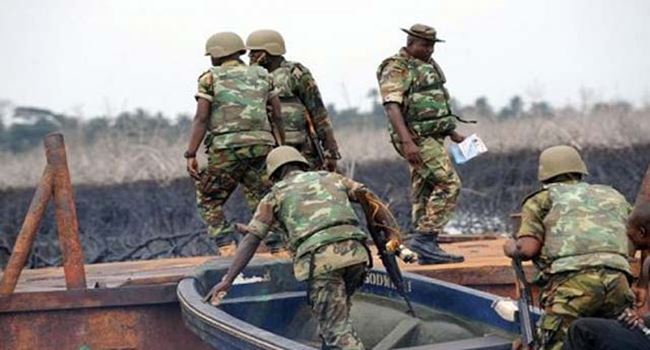 The Defence Headquarters said on Thursday troops of Operation Silent HEAT had rescued 13 foreigners who were abducted in Lome waters in the South South part of the country.

The Coordinator, Defence Media Operations, Maj.-Gen. John Enenche, disclosed this while briefing journalists on the operations of the military across the country.

Enenche said Nigerian Navy Ship SOROH in one of its operations in August intercepted a speed boat with seven Russians and six Ukrainians suspected to have been kidnapped by pirates in Lome waters.

He said four Nigerians were also on board of the speed boat.

According to him, the troops of Operation DELTA SAFE had sustained the aggressive fight against economic sabotage in the zone with tremendous successes.

He said: “Subsidiary Operation SILENT HEAT was launched by Operation DELTA SAFE on August 1 for 90 days.

“The objective of the operation was to protect critical installations, key points and vital points as well as combat all forms of illegalities and crimes in the area.

“The operation is conducted to maintain a conducive environment for oil and gas industries as well as other economic activities to thrive.”

He said that since the activation of Operation SILENT HEAT, several arrests and deactivation of various militant camps had been made.

“It was during the course of the operation that on August 19, Nigerian Navy Ship SOROH intercepted a speed boat with 13 foreigners made of seven Russians and six Ukrainians suspected to have been kidnapped by pirates in Lome waters.

“The 13 kidnapped foreigners and four Nigerians on the speed boat have been handed over to Defence Intelligence Agency for further necessary action,” Enenche added.