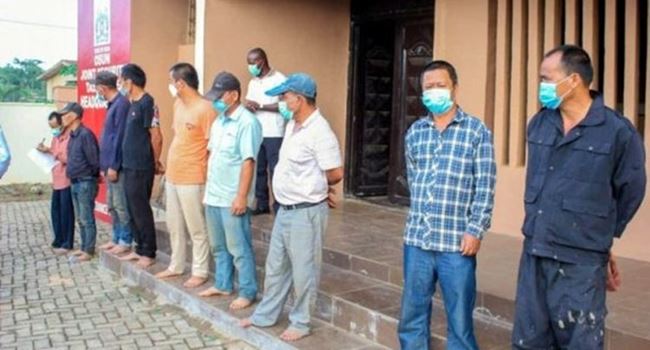 The umbrella body of miners in Nigeria has demanded the immediate handover and prosecution of illegal Chinese miners arrested in Osun State.

The miners under the aegis of the Miners Association of Nigeria (MAN), nade the demand on Sunday in a statement by its President, Kabir Kankara.

The association also expressed concern over the refusal to release the illegal Chinese miners to the Ministry of Mines and Steel Development for prosecution.

According to Kankara the issue had to with the Ministry because solid minerals belonged to the Exclusive List of the 1999 Constitution.

According to Kankara, though they were caught and arrested in Osun State, the State does not have the constitutional powers to keep or prosecute them because it is not a state affair.

He said: “What has happened in Osun state is a clear indication that things have been going wrong and God has started exposing them. I am in support of what the Honourable Minister is doing, that they should be prosecuted according to the law.

Read also: We are still looking for our hit-and-run BRT driver –Primero

He further stated that the association and Nigerians cannot watch and fold hands see illegal foreigners come into the country in collaboration with unpatriotic Nigerians to steal and cart away the commonwealth that belongs to all citizens of the country.

According to him, such saboteurs should be dealt with because they are out to sabotage the effort of the Federal Government to diversify and generate revenue from the solid minerals sector for national development.

“We cannot just fold our hands and allow foreigners to come and loot our commonwealth and go out with our treasures and get away with it. And all the Nigerians who are collaborating with them should also be prosecuted, not just the Chinese alone all those who are involved should be prosecuted”, he said.