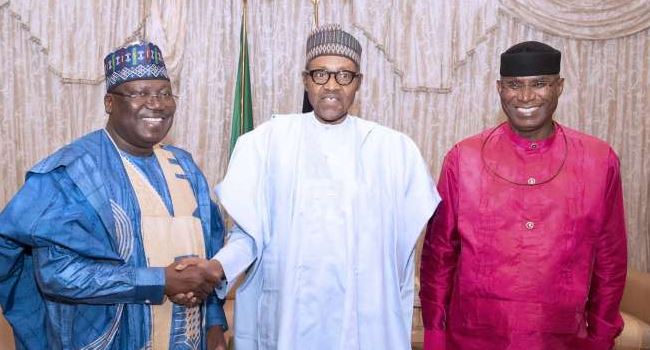 Following the claim by the Senate that ministerial list will be made available to them soon, President Muhammadu Buhari, on Thursday night, conveyed a closed-door meeting with the leadership of the National Assembly.

It was learnt that the meeting which signalled the president‘s readiness to unleash the ministerial list soon, was held at the new Banquet Hall of the villa.

It was also gathered from a liable source that the meeting was still ongoing as at 10 pm on Thursday.

Among the critical issues raised in the meeting include the reported submission of ministerial list by the president to the red chamber of the Assembly this week.

Recall that the Senate President, Ahmad Lawan, had on Wednesday at plenary revealed that President Buhari would submit the list of ministerial nominees for the consideration and approval of the senate before they proceed on recess.

Lawan was responding to an order raised by Sen. Bassey Akpan, who raised concern that delay in ministerial list may affect the senators’ holidays.

According to report, those at the meeting included the President of the Senate, Ahmed Lawan, Deputy Senate President Ovie Omo-Agege; Speaker of the House of Representatives, Mr Femi Gbajabiamila and the Deputy Speaker, Ahmed Idris Wase.

The national chairman of the All Progressives Congress (APC), Comrade Adams Oshiomhole and other presidential aides also attended the meeting.

Henceforth, Military uniforms, others will be made in Nigeria –Buhari