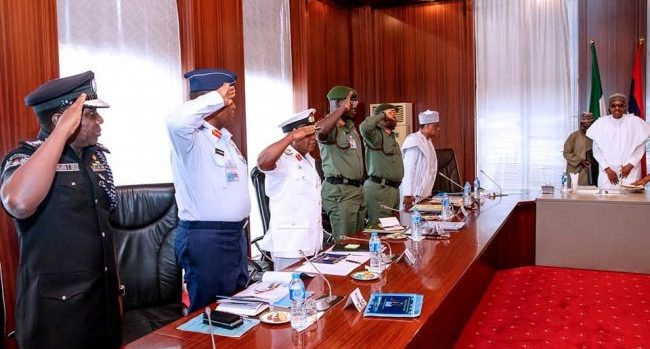 A ministerial nominee from Kano State, Maj.-Gen. Bashir Magashi (retd), on Thursday blamed infighting among service chiefs for the continued insurgency and insecurity in the country.

Gen. Magashi stated this while reacting to a question by the Senate Chief Whip, Orji Uzor Kalu during his screening by the Senate on Thursday, adding that the relationship among the service chiefs was not cordial.

He said: “Regarding the issue of the service chiefs, in my own view, we are caught in a situation where you find out that each commander or service chief tries to please the nation.

“Anytime the service chiefs conduct operations, you find radio coverage that the Air Force has done this, the Army has done this; thank God we are not near the ports where we can see that the Navy is also involved.

“If the Navy was around here, then the three services would have been on the same collision course. In an ideal situation where I served as an ECOMOG commander, it was a single unit that was overseeing the needs, the aspirations, welfare of our troops in combat zones.

“In Nigeria today, what we call command structure is now being seen as weakness. We have almost disseminated all our forces and I do not think the current structure is a true reflection of the manpower requirement in this country. We only have divisions probably by name but I do not think we have the required manpower to man them.”

Gen Magashi further noted that for the nation to win the war against insurgency and curtail the growing Insecurity in the country, the Army, Air Force and the Navy should have a common troop working together and should not operate independent of one another.

According to him, a single commander should take care of reinforcement, operations, change of troops, among other needs.