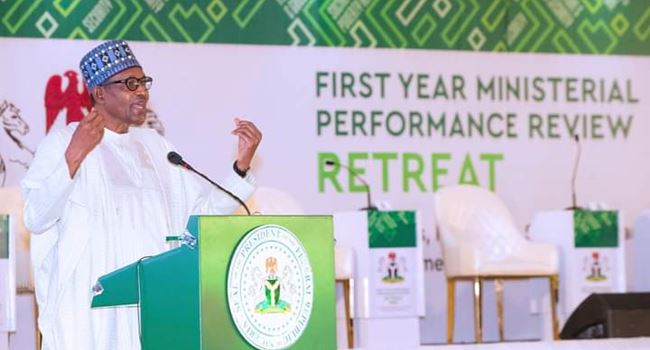 The Peoples Democratic Party (PDP) has knocked members of the President Muhammadu Buhari’s cabinet for celebrating what it called failure.

The opposition party was reacting to the ministerial retreat organised by the Buhari administration for cabinet ministers.

The party, in a statement by its National Publicity Secretary, Kola Ologbondiyan in Abuja on Thursday, also berated President Muhammadu Buhari for directing his ministers to go on the offensive in projecting the administration’s achievements.

The statement reads: “The Peoples Democratic Party (PDP) is alarmed by President Muhammadu Buhari’s directive to officials of his administration to “go on the offensive” against Nigerians, who are patriotically crying out under the burden of economic hardship foisted on them by his insensitive, clueless, deceptive and extremely corrupt administration.

“The PDP asserts that such directive in a ministerial retreat which ought to be a problem-solving forum, is symptomatic of an administration that has become overwhelmed by the reality of its own failures and now seeking desperate measures to suppress the voice of the people.

“Our Party declares that such anti-people stance amounts to a huge betrayal by Mr. President, who, before his elections, promised Nigerians an Eldorado, only to now turn around to label their cries and demands for good governance, security and basic necessities of life, particularly at the time they are agitating for reduction in the cost of fuel and electricity, as “irresponsible and politically motivated”.

“This is an unpardonable spat on the face of suffering Nigerians .

“We ask; by directing his ministers to “go on the offensive”, is Mr. President drawing a battle line between his government and Nigerians, who have been subjected to a life of misery in the last five years?

“Our Party holds that it is only a failed leadership that will resort to such aggressive stance, which also shows that the APC administration, in its arrogance and corruption, is not ready to listen to Nigerians; a situation that makes a legitimate action to draw their attention to the plight of the people most imperative.

“Moreover, our party also berates President Buhari’s ministers for insulting the sensibilities of Nigerians by organizing a feasting retreat in the luxury of an air-conditioned room, where they engaged in deceptive self-praise for non-existent achievements while the government they serve has turned our nation to the capital poverty of the world and foisted the worst form of hardship on our citizens.

“The deceptive intention and outlook of this retreat by President Buhari and his illusory ministers is a painful enactment of the allegory in the Orwellian Animal Farm in our country under the APC.

“President Buhari, in asking his minister to go on the offensive, appears not to be worried that under his watch, Nigerians can no longer afford their staple food and other basic necessities of life and that mortality rate has spiraled because of hardship and unabated bloodletting in our country.

“Also Mr. President appears not to be worried that the cost of medication, transportation, house rents, education, building materials and machineries have all skyrocketed and that majority of Nigerians cannot achieve the littlest of their legitimate dreams under his rule.

“Our party therefore firmly rejects President Buhari’s declaration that Nigerians, who are crying out in pain are ‘irresponsible’ or “politically motivated”.

“Mr. President should know that the solution to the economic hardship being faced by Nigerians under his watch cannot be reduced to a hand clapping party and ululation by cabinet ministers or issuing of suppressive directives against the people.

“Indeed, no responsible government should mount a high horse and spew on its citizens while they are groaning in the pains of the realities of its failures.

“Our party therefore charges President Buhari to immediately withdraw his offensive comment, apologize and listen to Nigerian before it is too late.”