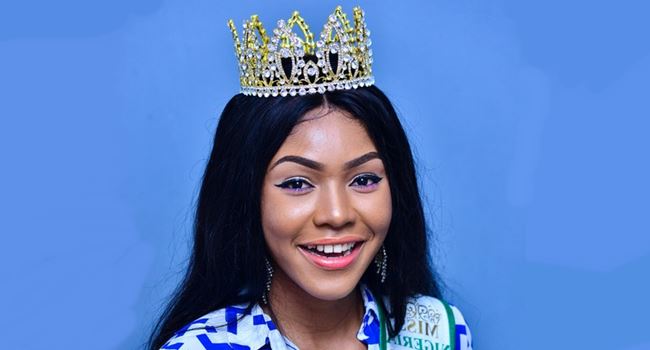 Chidinma Leilani Aaron, the 42nd lady to emerge Miss Nigeria has added her voice to the ongoing crisis in Sudan which according to reports is putting the country on the brink of disaster.

According to a statement issued by the current Miss Nigeria, it is worrisome that the crisis in Sudan which sparked off after the ousting of a long-reigning dictator is sparking fears that the military is gripping onto power.

Chidinma is also disturbed that hospitals in the capital of Sudan had estimated “more than 70 cases of rape” during the attack and its aftermath, which also saw over 100 deaths and at least 700 injuries.

The beauty queen also added that there is clearly a pressing need to put an end to the chaos and the spiraling human rights abuse, especially the efforts of the media in the creation of awareness on this matter.

Her statement reads thus; “There are numerous reports on the “tragic violence against protesters swinging out from Sudan. This is reported to be following the removal of longtime Sudanese President, Omar al-Bashir, who was President for a longtime/30 years. To be of positive help, I believe it is important to understand the issue in this region, objectively. There is also the need to look into the cause(s) extensively, in order end the violence and to arrive at an effective way to avert a repeat of the region’s previous military-strong regimes of oppression.

“As reported, hospitals in the capital had estimated “more than 70 cases of rape” during the attack and its aftermath, which also saw over 100 deaths and at least 700 injuries. This is a glimpse into the effect of the on going violence in Sudan. There is clearly a pressing need to put an end to the chaos and the spiralling human rights abuse, especially. I recognise the efforts of the media in the creation of awareness on this matter. However, more needs to be done by the media to open up this issue. This will aid in attracting all the support needed to expunge the present violence going on in Sudan. Thus, restoring peace to the region. This is a strong purpose my message aims to serve.

“Amid the chaos its important to note the progressive events being recorded in relation with the current state of Sudan. This includes the work of UNICEF (an organisation which focuses on helping disadvantaged children across the globe) in the region. They also offer a variety of ways those interested in aiding their efforts could become involved. There are also petitions calling for a UN investigation into the massive violence against protesters earlier this month. There are ongoing pushes for awareness on the issue from celebrities and public figures across the world who decided to use their platforms to publicly support the protesters and others affected by the violence. It has been reported, as well, that the U.S. sent Assistant Secretary of State for African Affairs Tibor P. Nagy, accompanied by a special envoy to meet with leaders in Sudan. That was in efforts to support a political solution to the current crisis that reflects the will of the Sudanese people. The meeting was scheduled to hold in Khartoum and Addis Ababa from the 12th -13th of june, 2019. As the proceedings of the meeting are awaited, I urge us all to focus our energy on positive efforts aimed at bettering the plight of the Sudanese people.

“In conclusion, I applaud the positive contributions of various individuals and groups who moved and keep moving towards providing food and relief supplies to those affected by the violence. Also, I celebrate all those poised towards fostering peace and good governance in Sudan. On this note, I call on every well meaning individual and group to contribute their qouta to ensuring peace across our continent, Africa.