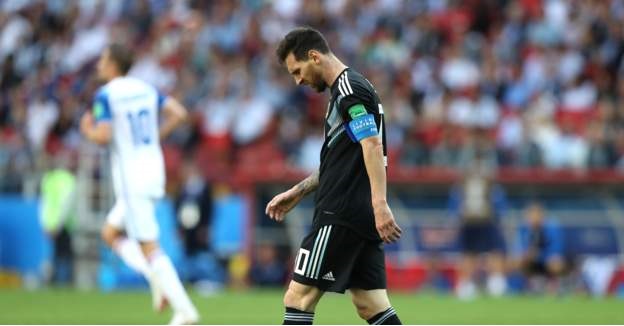 Argentina captain Lionel Messi says it hurts that his side could not secure a win in their opening match of the 2018 FIFA World Cup against Iceland on Saturday, blaming his failure to convert a penalty for the draw.

The South Americans, favourites to advance from Group D, were held to a 1-1 draw by debutants Iceland who put up a spirited fight against them at the Spartak Stadium in Moscow in Russia.

The two-time world champions were presented with a clean opportunity to take the lead when Messi was brought down in the box in the 64th minute, but goalkeeper Hannes Halldorsson – the most valuable player in the game – pushed away the penalty taken by Messi.

“We had a hard time creating chances,” Messi was quoted on Mundo Albiceleste after the game.

“We are going to go out to there to beat Croatia. We were superior to Iceland. We tried but it wasn’t to be, missing the penalty hurts.

“I’m not worried but angry and it hurts because I missed a penalty. I feel responsible for is not getting the three points.

“It would have changed everything but we are calm.

“We don’t have to go crazy. We just started and we know it won’t be easy. It hurts because we deserve to win.”

Argentina will face Croatia next before playing the Super Eagles of Nigeria in the final group game.