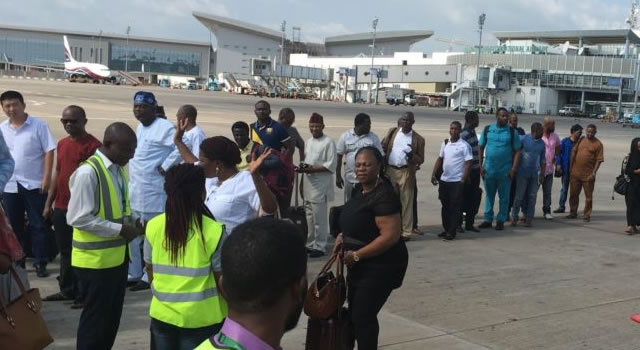 The ongoing picketing at the Murtala Mohammed Airport 2 (MMA2) Lagos by aviation unions, has forced airlines to make alternative arrangements to fly their passengers.

The picketing, embarked upon on Wednesday, forced the affected airlines to move their passengers to the General Aviation Terminal, GAT operated by the Federal Airports Authority of Nigeria (FAAN)

The unions are protesting the sack of 24 employees of Bi-Courtney Aviation Services Limited (BASL), operators of the MMA2, who indicated their desire to be unionised.

The picketing is coming despite a subsisting court order issued by Justice I. N Buba of a Federal High Court in Lagos restraining them from the action.

Speaking on the development, the Corporate Communications Manager of Dana, Mr Kingsley Ezenwa, said the arrangement to move the airline’s passengers to GAT was reached on Wednesday after they were prevented from entering MMA2.

“We have made an alternative arrangement since yesterday and at the moment, the strike is still ongoing but we are hoping that everything will be resolved as soon as possible.

“First, we are apologising to our guests for any inconveniences caused by this development.

“It is so unfortunate that those who actually have no business with what is happening are the ones suffering in the battle between these two organisations.

“So, we are appealing that they resolve it as soon as possible because passengers come first. Without the passengers, there is no airline, there is no industry and we need to start considering them before taking any decision,” he said.

According to him, the airlines operating in the MMA2 had incurred loses amounting to millions of Naira since the strike began, adding that they still had to pay FAAN to process their passengers at the GAT.