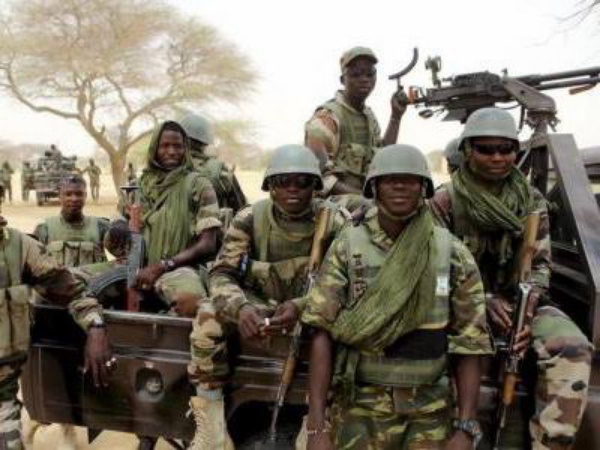 Troops of the Nigerian Army under the Multinational Joint Task Force (MNJTF), successfully eliminated over 300 terrorists of the Boko Haram/Islamic State of the West African Province (ISWAP) sects in continuos clear out operations in the fringes of Lake Chad Basin in North-East Nigeria.

This was disclosed on Saturday by the Chief of Military Public Information Officer HQ MNJTF N’Djamena, Lt. Col. Kamarudeen Adegoke, while addressing journalists in Maiduguri, Borno State on the progress of the war against insurgents in the region

In a statement at the press parley,
Adegoke said the Force Commander, Gen. Abdul Khalifa, had, during an appraisal meeting with all Commanders of the MNJTF drawn from all sectors, ordered the troops to go all out and eliminate the insurgents.

Khalifa said that the meeting was designed to appraise the operations so far in preparation for the next decisive stage.

He added that during the clear out operations, four Improvised Explosive Devices (IED) factories run by the insurgents were discovered and destroyed while necessary counter measures were proffered.

“About four IED making factories were destroyed in the course of the operations so far.”

The MNJTF spokesman was full of praises for the decisive role played by the air component of the MNJTF/ Operation Hadin Kai for the remarkable role it played in taking out several enemy camps, equipment and commanders, including the recent killing of an ISWAP leader, Abu Ibrahim, in the Lake Chad Tunbumas, who was a ferocious commander in the Timbuktu General areas.

According to Khalifa, more than 52,000 terrorists comprising of fighters, those conscripted by force, and their families have surrendered in the MNJTF and Op Hadin Kai areas of operational responsibility.

However, he regretted that the troops also lost some personnel in the various theatres of operations.

“Regrettably, the Operation recorded about seven casualties comprising six soldiers and a member of the Civilian Joint Task Force supporting the operations.

“Several troops have also been injured but are recuperating well,” he stated.

DEBORAH: Sokoto gov’t extends resumption of schools by one week