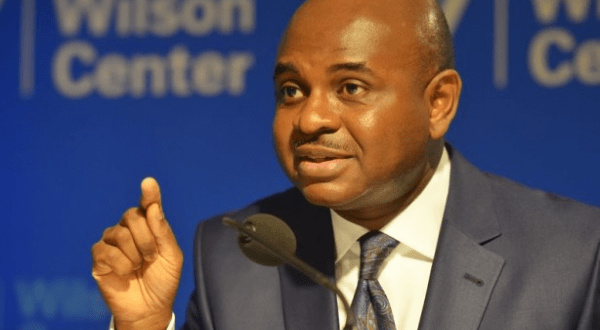 Prof. Kingsley Moghalu became one of the first Nigerians to openly declare his interest to contest for Nigeria’s presidency in 2019 when he addressed the media recently in Abuja on his decision.

Others like Sule Lamido, Atiku Abubakar, Musa Rabiu Kwankwaso, Ibrahim Dankwambo, Donald Duke and Muhammadu Buhari have only been linked to the 2019 presidential contest, or, at best, touted to be interested in the race.

By making his intentions known publicly, Moghalu puts an end to speculations about his aspirations which heightened with sharing of his pictures on social media, with such leaders as ex-Secretary General of the United Nations, Mr. Kofi Anan, ex-president Olusegun Obasanjo and top international figures from the United Nations circle and the global economic community.

Moghalu came to prominence when he was appointed the deputy governor of the Central Bank of Nigeria (CBN). He was a deputy under the leadership of Sanusi Lamido Sanusi, now emir of Kano. Prior to that, Moghalu had been exposed to the international community through the United Nations where he served at the Special Court for Sierra Leone. His time with the UN took him through Cambodia, United States of America, Yugoslavia (as it then was), Croatia, Tanzania and Switzerland over a 17-year period.

Leaving the United Nations, he founded Sogato Strategies, a risk strategy company based in Geneva. He also founded the Isaac Moghalu Foundation, a philanthropic organisation dedicated to providing support to literary and educational institutions and also, access to education for the less privileged.

Moghalu became a professor of international business and public policy at the Fletcher School of Law and Diplomacy at Tufts University in Massachusetts, USA, after his stint with the CBN. He describes himself, on his personal website, as a “political economist, Central banker, CEO, thought leader, UN diplomat and lawyer”. From his biodata, he is all that rolled into one.

But he is not a politician. This may be the reason his declaration of intent to contest for the presidency in 2019, may just be an effort to stir the waters and seek attention. So, how real is Moghalu’s quest to disrupt Nigeria’s political space, culture and history. Here are 6 reasons why he may just be shadow-boxing:

‘Peculiarity’ of local politics
No doubt, he is widely travelled and connected internationally. He is well read too. But he lacks leadership experience on the Nigerian scale. While it sounds insulting to say that what works elsewhere does not work in Nigeria, the reality however is that Nigeria is a peculiar case which Moghalu ought to have studied deeply before declaring his intentions.

It is agreed that many Nigerians would want a change in the leadership recruitment system of the country. But again, the reality is different. Analysts believe that Moghalu may be a good candidate for the presidency haven prepared himself with academics and international exposure, but his lack of deep knowledge and exposure to the local scene robs off negatively in his quest.

First, he flagged off his quest for the presidency without political party identification and membership. In other words, he put the cart before the horse. The two dominant political parties (at least for now) with structures and ability to win the presidency in 2019 are All Progressives Congress (APC) and Peoples Democratic Party (PDP). The other political parties, more than 64 in all, exist just to make up the numbers. As it is, Moghalu is not known to be a member of either of the two parties. This means that his quest is not deeply rooted.

Secondly, the ruling party had declared a “no vacancy” for the presidential slot in 2019 as Buhari is still firmly on the hold. An opening can only exist in the APC if Buhari declines the pressure on him to recontest his office. If he does, then, the party will throw its doors open and only to party members from the north where it is likely to zone the office. Within this arrangement, Moghalu would not be a consideration.

Read also: Challenged on Buhari’s non-visit of attacked areas, Osinbajo says ‘no amount of condolence can compensate for loss of life’

Already, PDP had publicly disclosed its decision to zone its presidential slot to the north. That accounts for reason no party members from the southern divide of Nigeria had expressed intention to contest for the party’s presidential ticket in 2019. For APC and PDP therefore, Moghalu’s intention is stillbirth. His other option would be to seek the support of any of the numerous political parties still occupying space. Aligning with any of the parties will be welcome. It will afford him the opportunity to test his popularity among the electorate.

‘Unknown’ quantity
Sadly, elections in Nigeria are not a contest of ideas. Rather, they are popularity contests. At the national level, besides being a deputy governor of CBN, Moghalu is largely unknown. He is unknown to the electorate. He is unknown to the political elite. And these alienate him from the electoral process. If however, he intends to contest as an independent candidate, he may have to wait till amendments to the constitution which approved independent candidacy, become law.

If he goes that way, he may eventually come to realise that being an independent candidate is not as easy as it may seem. He would need to build and fund structures across the 774 local government areas of the country and countless development centres. Such structures will have to be funded and supported. While he may have the international connection to seek to be president, he may not have the local support necessary to deliver him and as a “UN Diplomat”, he may not be given to rigging.

‘Wrong’ permutations
Another reason that works against Moghalu is his origin. He is from the Southeast of Nigeria. The southeast looks forward to a term of presidential office after the north has enjoyed its stint with Buhari, or another person. This means that the southeast has its eyes set on a date in 2023 or thereafter. After that, the southeast would be expected to vie for the top office. Moghalu will not come within the consideration index then. Analysts argue that he has not been tested and it will be difficult to bring an untested quantity into the leadership index in Nigeria.

For this reason, some who had followed Moghalu’s declaration, though believe he is eminently qualified; argue that he ought to try out his leadership capacity at the governorship level first. “The governorship of his home state will enable Nigerians to access him and his capacity for the presidency”, was how an analyst, James Madaki, a lawyer, put it.

‘Ethnic’ suspicions
Again, presidential elections in a country like Nigeria, divided by ethnicity and mutual suspicion, is not necessarily won on academic credentials or professional history. The dynamics go beyond these. Nigeria has a leadership selection system that excludes the majority. That system was responsible for the selection of Umaru Yar’Adua to become president in 2007. It was also instrumental to the coming of the Goodluck Jonathan’s presidency. It also played a huge role in th coming into being of the Buhari presidency. It is doubtful if that selection process will not play a role in 2019 irrespective of how much Nigerian masses want to take full charge of the leadership selection process.

‘Unrepentant’ cabal
That ‘selection team’ consists of some past Nigerian leaders and military officers. The team is not yet ready to quit the stage especially, with the fractious nature of the country which was made worse by Buhari’s disregard for Nigeria’s diversity. This means that the next Nigerian president will be someone who is generally accepted across the country. He has to be someone with deep knowledge of the country’s diversity and who appreciates the advantages same confers on the country. Moghalu does not seem to fall within this bracket. There are no evidences to show in this regard.

And this…Moghalu a ‘visiting’ Nigerian?
For the most part of his life thus far, he has been a ‘visiting Nigerian’. He sees Nigeria from the prism of foreign lens. Will this help him in his quest? Madaki says “a better understanding of Nigeria’s politics comes from lived experience, not from books”. That is what may be lacking in Moghalu’s extensive curriculum vitae. That also may be reason his quest may just be the beginning of an excursion into 2023, not 2019.
By Femi Qudus…