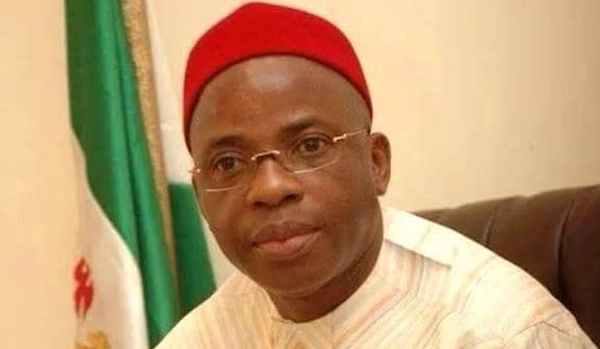 Former Imo State Governor, Ikedi Ohakim, has defected from the Peoples Democratic Party (PDP) to the ruling All Progressives Congress (APC) five months after he denied habouring such thoughts.

In February, Ohakim had dismissed reports that he was planning to join APC, saying there was no truth in such insinuations as they were mere speculations from his political enemies following his romance with Governor Hope Uzodinma.

Reacting to the claims through a statement by the Director-General of his campaign organisation, Austine Otuokere, Ohakim had said there was no reason for him to dump the PDP.

However, on Tuesday, Ohakim perfected his defection to the APC at his country home in Okohia, Isiala Mbano Local Government Area of the state.

Giving reasons for his defection to the ruling party, Ohakim said it was his desire to offer “unhindered support to Uzodimma to move the state forward” and add value to the state that made him take the decision.

“Given my commitment to the best decisions that would be most beneficial to the people and desirous of the need to quickly join hands with my friend, Uzodimma, and other leaders of the party in Imo, South East and Nigeria to build a formidable political party headed by individuals that share the same values and ideals with me, I, Ikedi Ohakim, and my supporters and associates decided to join the APC.

“This decision is in response to the pleadings of my admirers and the touching request by the leadership of APC in Imo. What I am doing today, therefore, is to publicly endorse an action I took at my ward level many months ago.

“Gov. Uzodimma has shown zeal, commitment and capacity to provide good governance, and at this point in time, I have to support him to uplift the fortunes of the state and meet the desires of the people.

“Added to the above, I find in Governor Uzodimma a man who is determined to set enviable records that would change the lives and fortunes of the people and the state at the end of the day,” Ohakim said.