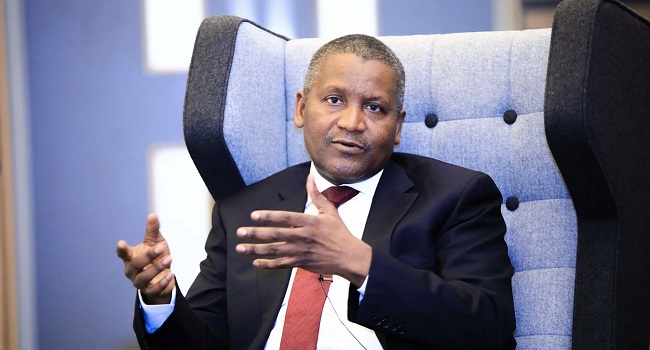 President of the Dangote Group, Aliko Dangote, on Wednesday decried the level of poverty in Nigeria most especially the northern region of the country.

He noted that over 60 per cent of citizens in North-west and North-east of the country live in “extreme poverty” and called on the governors of the region to rise and address the economic woes staring their people in the face.

Africa’s richest man stated this in the keynote address he delivered at the 4th edition of Kaduna Economic and Investment summit (KADInvest4.0).

“We have what it takes to turn around our fortunes and I pray all the 19 governors of the northern states will wake up and follow the footsteps of the Kaduna State Government.

“Given the vast arable land and conducive condition, I think in the next 10 years, agriculture can generate more revenue and prosperity than oil that we have now if we have the right commitment,” he said.

Dangote, who challenged governors of the northern region to identify their areas of comparative advantage, added that the provision of information and data on what was available in various states was equally necessary.

He said to address the issue, there was need to encourage local investors because they will attract foreign investors.

He added, “While the overall social economic consideration in the country is a cause for concern, the regional indicators are very alarming. In the north-western and north-eastern parts of Nigeria, more than 60 per cent of the population lives in extreme poverty.

“Northern Nigeria will continue to fall behind if the respective state governments do not move to close the development gap and that is why we are always saying that the biggest challenge we have and what we are always praying for is to have 10 governors like Mallam Nasir El-Rufai in the North.”

Dangote’s comment is coming just as a UN report rated Nigeria as among eight countries where word poorest live.

Related Topics:Aliko DangoteDangote on extreme poverty in the NorthDangote on North govs to address poverty in North
Up Next