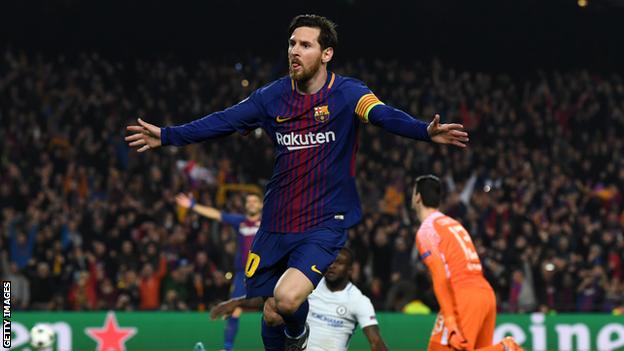 Nigerian winger, Victor Moses was in action as his club Chelsea crashed out the UEFA Champions League following a 3-0 thrashing by Barcelona in Camp Nou on Wednesday night.

The Premier league champions could not make it past the round of 16 stage as an error-ridden second leg encounter saw them fall 4-1 on aggregate to the Spanish giants, having been held to a 1-1 draw at Stamford Bridge.

A Lionel Messi double and an assist that led to an Ousmane Dembele goal completely sunk Antonio Conte’s men, who now have only the FA Cup to chase this season.

With just 128 seconds into the game, Messi opened the scoring for the home side, as he fired a shot through the legs of Thibaut Courtois from a tight angle.

The Argentine then set up Dembele 17 minutes later to hammer home the second after Cesc Fabregas lost possession.

Chelsea had many missed chances in the game, including Marcos Alonso’s free kick that hit the post. And they misplaced a lot of passes.

But Messi did put the game out of reach of their visitors when he scored his 100th Champions League goal after a mistake by Cesar Azpilicueta on 63 minutes.

As it stands, Chelsea join fellow Premier League clubs Manchester United and Tottenham in exiting at this stage, while Barca join fellow La Liga giants Real Madrid and Sevilla in the quarter-finals.

2018 WORLD CUP: Rohr has ‘no special plan’ to curtail Messi