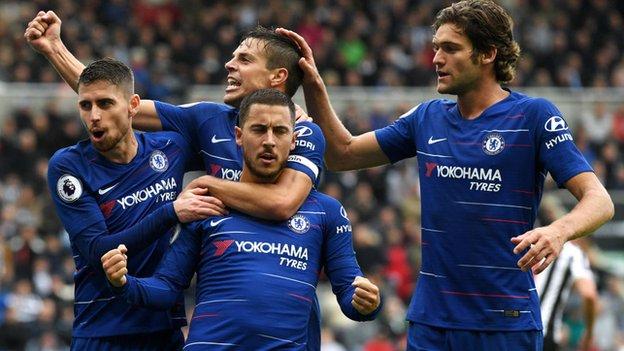 Nigerian wingback, Victor Moses was neither in the line up or the bench for Chelsea, who defeated Newcastle 2-1 on Sunday.

A late own goal helped the Blues secure all three points from the thrilling encounter.

It was Chelsea’s third win in three matches so far this season, and it moves them level on points with Liverpool and Watford at the top of the table.

Newcastle have only one point from a draw in their last game.

Read Also: Serie A: 2 wins in 2 for Juventus – Ronaldo yet to score

Chelsea dominated the game, and went ahead when Eden Hazard, who was making his first start this season, netted from the penalty spot in the 76th minute.

The home side got level as substitute Joselu fired in with a brilliant header in the 84th minute, and could have earned a point from the encounter.

But they failed to clear their lines few minutes to the end, and Marcos Alonso’s shot took a deflection off DeAndre Yedlin to give Chelsea the win.

In the other Premier League encounters on Sunday, Burnley were beaten 4-2 by Fulham while Watford earned a third win in the season with a 2-1 victory at home over Crystal Palace.