Moses, Ndidi, Opkotu up for Player of the Year award 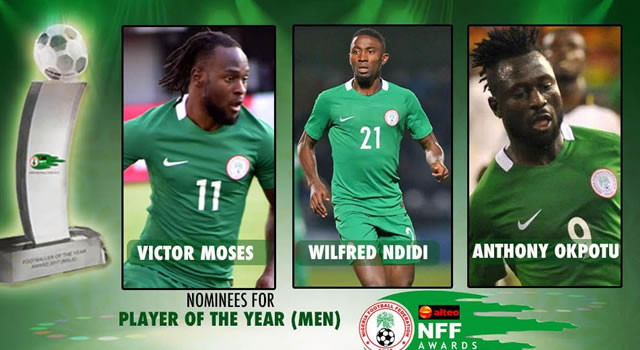 Moses, who failed to make it to the final shortlist of the CAF African Player award despite winning the English Premier League last season, could grab the maiden AITEO/Nigerian Football Federation (NFF) men’s player award.

The nominees in the various categories of the awards which is scheduled to hold at Eko Hotels & Suites in Victoria Island, Lagos, have been revealed by the football body on its official twitter handle, @thenff.

In the Women Player of the Year category, Super Falcons star, Asisat Oshoala, who bagged the 2017 CAF female player, will battle Charity Reuben and Francisca Ordega for the title.

And while Stephen Odey, Nura Mohammed, and Iko Uwem Udoh have also been nominated for the Young Player of the Year (Men) category, Kennedy Boboye, Abdul Maikaba and Fidelis Ilechukwu are up for the Coach award.

The Awards Gala, which will be graced by FIFA president Gianni Infantino and CAF President Ahmad, will mark the first time the Nigeria football federation is organizing an Awards ceremony to reward and inspire the major actors in our football space.