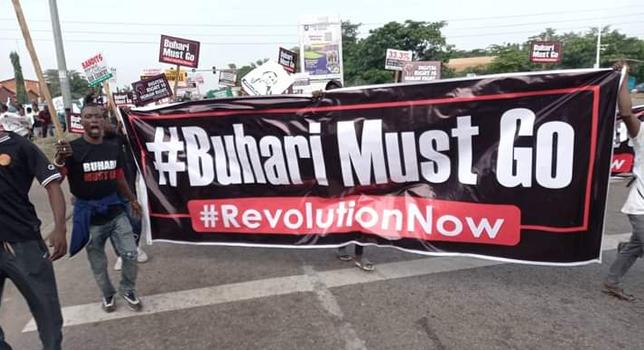 Several parts of Abuja, the Federal Capital Territory (FCT) was on lockdown on Monday, leading to serious traffic congestion as protesters under the aegies #BuhariMustGo took over the city.

The protest which kicked off in the early hours of Monday, according to the organisers, was one of the steps taken to force the exit of President Muhammadu Buhari due to worsening insecurity, poor economy, and massive unemployment in the country.

The protesters who marched through major roads in the FCT, were heard chanting ‘Buhari Must Go’ and other anti-government slogans.

They went a step further by burning tyres and causing traffic gridlock on some roads.

This is the second of such protest as on June 12, which is Nigeria’s Democracy Day, many Nigerian youths also trooped to the streets in many states across the country to say they were tired of the Buhari-led government.

According to the protesting youths, the present regime has not given them hopes of a better future as complaints of worsening insecurity, abduction of school children, herders attack, banditry, poor economy, and massive unemployment.

The protest marches which took place simultaneouslyin differentparts of the country including Ibadan, Port Harcourt, Lagos and Akure, reportedly grounded activities to a halt, with the youths promising to continue on the protest marches at regular intervals.