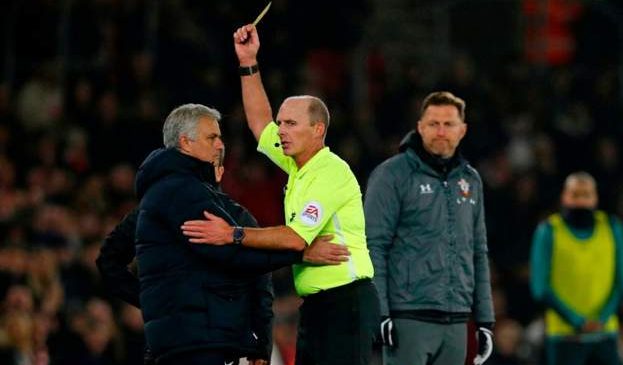 Tottenham Hotspur had a rather unpleasant start to the new year as manager Jose Mourinho got a yellow card while striker Harry Kane walked off injured in a Premier League clash on New Years Day.

Spurs were beaten 1-0 by Southampton as a brilliant goal from Danny Ings gave Saints the narrow but deserved win over their visitors.

Ings superbly flicked the ball in the 17th minute over Toby Alderweireld before shooting past Paulo Gazzaniga for his ninth goal in his past 10 games.

Kane was forced off with a leg injury just seconds after having a goal disallowed for offside in the second half, before Mourinho got booked for going over to the opposition bench and was in the face of one of the Southampton staff.

The huge win for Southampton takes them to 11th on the table, while Spurs stay on sixth.

In another Premier League clash played concurrently, Super Eagles duo of Wilfred Ndidi and Kelechi Iheanacho were both in action as Leicester City thrashed Newcastle United.

The Foxes’ impressive season continued with a dominant 3-0 victory that keeps them second and inflicts a third straight defeat on Newcastle.

Goals by Ayoze Perez and James Maddison in the first half put the visitors in command at halftime, before substitute Hamza Choudhury scored a superb third late in the second half.

Elsewhere, Nigeria international, Isaac Success was an unused substitute for Watford, who defeated Wolverhampton Wanderers 2-1 in a thrilling encounter.

Although Watford were reduced to 10 men late on, first half goals by Gerard Deulofeu and Abdoulaye Doucoure were enough to hand them victory despite Pedro Neto goal for Wolves on the hour mark.