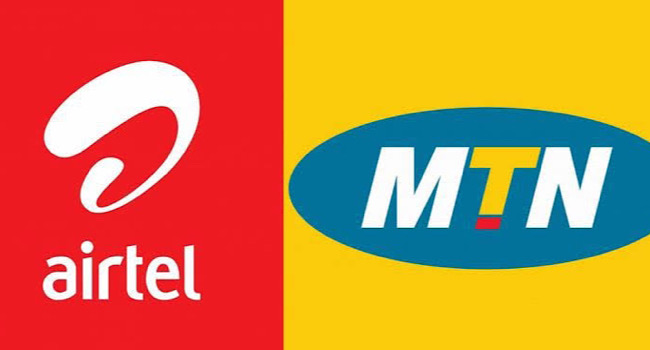 The data war between the network providers in Nigeria is getting more intense. However, it ended with Airtel Nigeria, MTN Nigeria and 9mobile making the losers’ list as subscribers dumped the three networks for their rival, Globacom.

In an industry figure seen by Ripples Nigeria, Airtel, MTN and 9mobile lost over 760,000 internet subscribers in the last month of 2020 fourth quarter, the same period Globacom added over 200,000 subscribers to its data subscriber base, according to Nigerian Communications Commission (NCC) industry report.

In the course of 2020 Full Year, there was intense competition between MTN, Airtel and Globacom, as they all kept onbordening new subscribers, but December departed both Airtel and MTN from Globacom, which was the only network provider that didn’t suffer a loss.

MTN lost over 400,000 subscribers in December, as its data subscriber base shrank from 65.76 million down to 65.35 million, while Airtel subscribers also left the Bharti-owned company, causing a dip in its number of subscribers to fall from 41.52 million to 41.28 million.

9mobile lost over 100,000 of its subscribers during the same December period, nosediving to 7.12 million from a base of 7.23 million. 9mobile is the only Nigerian telco that lost subscribers more than once, as the company recorded loss from January to June, before picking up in July to October, then it went on another round of losses in November and December.

Ripples Nigeria calculation showed that despite losing the highest number of subscribers in December, MTN gained the highest in 2020 FY, as about 11.24 million subscribers joined the company in 2020, to raise its data subscriber base to 65,35 million from 54.11 million MTN began the year with – and cement its lead in the data war.

Globacom came close to MTN’s mark, as the Mike Adenuga-owned network operator added 11.17 subscribers to its data base last year, having started the year with 28.93 million to end with 40.10 million in December 2020, as it seek to surpass Airtel.

Airtel managed to hold on to its second spot in the data war despite losing subscribers in December 2020, after gaining an additional 6.76 million subscribers to keep Globacom behind it. Airtel’s total data subscriber base closed with 41.28 million, surpassing the 34.52 million it started the year with.

9mobile continue to disappoint its subscribers who keep exiting the company in large numbers as they struggle with quality network service. 9mobile failed to surpass the 8.06 million subscribers it started 2020 with, ending last year with 7.12 million, following a loss of over 940,000 subscribers in 2020 Full Year.

This means only 9mobile failed to surpass the figure it began 2020 with. The loss in subscribers by MTN, Airtel and 9mobile didn’t cut the number of total industry data subscriber, which ended with 153.87 million, against the 125.72 million subscribers it started 2020 with.

The loss recorded by MTN, Airtel and 9mobile could be linked to network quality and purchasing power of their subscribers. For MTN and Airtel, they are both known for high depletion rate, which frustrate subscribers and causes them to dump the networks for cheaper alternative.

For 9mobile, it’s about poor network coverage, as 9mobile doesn’t have a wider coverage compared to its industry rivals, and coupled with its unstable network quality, subscribers could be prompted to switch loyalty.

BUA purchases one million doses of COVID-19 vaccines for Nigeria