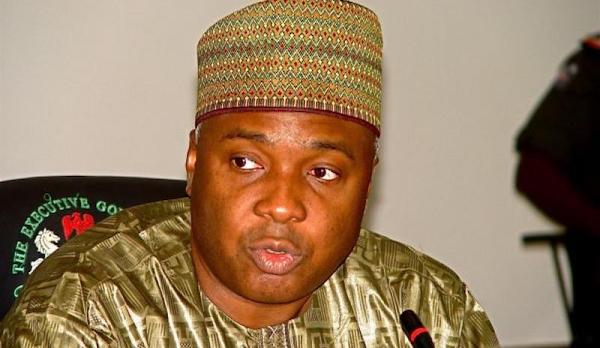 Oluwole Onemola, a media aide to Bukola Saraki, former senate president, has said that the claims by the Muslim Rights Concern (MURIC) over the approval of $1 billion fund for procurement of arms by the 8th Assembly is false.

Onemola made this disclosure via a statement issued on Thursday, April 8.

Despite the failure of President Muhammadu Buhari to follow the right procedure for the approval of the sum, the national assembly still went ahead to give its consent, he stated.

This assertion was in response to a statement attributed to Ishaq Akintola, MURIC director, who alleged that the Saraki-led senate frustrated Buhari’s fight against insecurity by failing to approve the aforementioned sum.

“Nigerians would have witnessed a drastic improvement in the security situation in the country had that request been granted,” Akintola had said.

Nonetheless, Onemola recalled that there was a US ban on sale of military hardware to Nigeria, owing to human rights abuses.

Read also: ‘Give PDP another chance at the centre,’ Saraki begs Nigerians

He said it was after a meeting of some US lawmakers with the then leadership of the national assembly that it was recommended to former US President Donald Trump to approve the deal.

“On Wednesday, the 25th of April 2018, the then-President of the Senate, Sen. Dr. Abubakar Bukola Saraki, read a letter from President Muhammadu Buhari, which stated that he had granted ‘anticipatory approval’ for the release of $496,374,470. These funds were said to have been paid directly to the Treasury of the US government,” Onemola said.

“Nowhere in our Constitution is the principle of ‘anticipatory approval’ provided for.

“This means that Mr. President did not follow the proper procedure during this Constitutionally-flawed and thoroughly unprecedented ‘anticipatory approval.’

He said the national assembly under Saraki had “a clear-cut track record of working to tackle issues related to insecurity head-on”.

“The public is hereby advised to disregard MURIC’s utterly biased and factually devoid statement. This is because: Men can lie. Women can lie. But dates, facts, and numbers don’t,” Onemola added.